Welcome to that little spot in the week that forces you to look outside the English language for your cinematic offerings. Foreign Friday is here to inject just a little bit of culture into your film watching habits. Since this week sees the release of Guillermo del Toro’s tribute to the mega monster films of times past in Pacific Rim, it only seemed right to feature a film with the strange and monstrous. Pack your running shoes as we travel to South Korea with The Host.

In a small American military lab in South Korea, two doctors are finishing up their day. Standing between them and the day’s finish line are copious bottles of formaldehyde. Despite his protests, the Korean doctor follows the directions of his superior and goes about disposing of the chemical down the sink drain, leading directly to the Han River. Years later on a seemingly normal day, a large amphibious beast emerges from the river to wreak havoc on the metropolis of Seoul. In the mayhem that ensues, Park Gang-du (Song Kang-ho), a less-than-intelligent shop worker, loses his daughter Hyun-seo (Go Ah-sung). With the city on lockdown by the American military and Gang-du in quarantine, he and his family must not only find a way to escape but to locate and rescue his daughter.

If you were to look at nothing but posters and images from the film you would be justified in believing that this is your typical monster film. Of course I only make this statement to highlight how this assumption is completely incorrect. Sure, the film’s central story is greatly concerned with the monster that seems to have a taste for human flesh and chaos; but with the world’s continued political awareness and the increasing military presence, especially by outside countries, there is just so much more story to be told concerning the way the situation is handled. I am a proud American so the negative light in which the country is portrayed in the film is slightly upsetting, although it is difficult to call it unfounded. The first scene between the two doctors plays to a point of parody with the ridiculous lengths it goes to vilify the American doctor. It doesn’t go so far as to look into the camera and state, “This is all America’s fault”, but it might as well have.

As the film continues, the spotlight is reduced to a smaller torch and it makes the message more palatable. In this case the Americans were the cause of the problem, but it is not only the American military presence but also the Korean’s political handling of the Americans that can be called out for the continuance of the travesties. There is the go-to characterization of the government as inept and unable to fulfill the duties that it is specifically designed for. The leaders care only about ending the ordeal with the least amount of damage to their image and have little care for the people involved. In fact, the media is often just as much to blame, with a 24-hour news cycle that is constantly starved for the next new and exciting sound bite. As soon as one person mentions a possible cause or effect, the perfectly coiffed television anchor is there to parrot the unchecked “facts”. Exploring the politics of tragic situations has become slightly typical in more recent films but in this case it feels quite specific to the current Korean climate, primarily with an American military presence, and keeps the film from feeling derivative.

Of course a monster film wouldn’t be that without its monster. While the CGI is occasionally distracting in its lack of polish, the creature design on display is impressive. The filmmakers are careful to show that this isn’t some alien but rather an effect of a selfish doctor’s carelessness with chemicals. The creature is the result of a mutation of some animal within the river and the way it interacts with its surroundings and moves about its environment proudly reflects that. Many will probably not notice it and will simply think it’s a scary looking monster (don’t get me wrong, it is absolutely a scary looking monster), but the small touch shows a careful eye with an attention to detail that is greatly appreciated.

I also shouldn’t forget to mention the family story that propels most of the film forward. The monster forces Gang-du to finally man up and be a father. You can tell that the man loves his daughter but in his losing her he must now fully show it. His lay about nature is compromised and he basically must entirely change his character in order to answer this unrequested call. The annoyed brother character, portrayed by Park Hae-il, leans a bit too hard on the holier than thou stereotype; but the remaining members of the family have an authenticity to them that is a welcomed change to a genre that is typically littered with stock characters. The ending of the film will do things that you will assuredly not expect, mostly in service to the film’s deeper political message, but its main character undergoes a growth that is well-earned and surprising in a film that features a mutated amphibious beast. 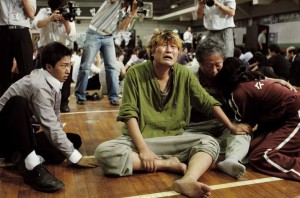 The modern day monster film is kind of forced to be more than simply its monster. While past films could rely on interesting character design or an awe inspiring image, filmgoers now expect a bit more than simple destruction with their mutated beasts. The Host certainly looks to provide. The political undertones are so strong within the film that they nearly stop being undertones (although overtones still doesn’t seem to be the right word). The film does not really offer up a solution, except perhaps a need to pay better attention to its people, but strongly posits that the government is self-obsessed and broken. Amid all of the chaos is a smaller story about family. The characters are fully developed and Kang-ho Song’s portrayal of Gang-du stands out in its ability to show the struggles of rapid mandated growth. This little story however occasionally gets lost in the political posturing and monstrous havoc, although it offers the most emotional connectivity. The Host is a monster film with plenty of meat on its bones and even though its political message is aggressive it certainly isn’t unnecessary.

Derek writes about all films, not just the foreign ones. For his latest, follow him on Twitter @DerekDeskins.