It feels somewhat surreal to write a review for R.I.P.D. Fans of the source material, the Dark Horse comic book, have assuredly been watching the production news with anticipation. Then we were served up the first bits of marketing. Buzz quickly dissipated. The trailer failed to rile excitement and the general consensus was that it looked like a Men in Black rip-off. The film nearly dropped off the radar completely. As many of you know, the members of the press get to see films before their release, to give us the necessary time to write up our reviews and in some cases raise excitement. In the case of R.I.P.D., I walked down a hall of theater doorways, set to attend the seven o’clock screening of the film, and as I did so I passed not one, but two separate theaters set to show the film that night, at eight and nine-thirty. It didn’t inspire much confidence.

Nick Walker (Ryan Reynolds) is a rising star in the Boston Police Department. Having recently finished up a big drug bust, he and his partner are riding high. News comes in that a drug kingpin has been spotted and Nick is among the many taking part in the raid. During the explosion and gunshot-laden proceedings, Nick bites the big one. After being swallowed by the sky, Nick is told that he will not yet face judgment, instead he has been enlisted in the Rest in Peace Department, a supernatural police department tasked with recapturing escaped dead souls, or Dead-Os. He and his new partner, Roy (Jeff Bridges), take to the streets of Boston to rid them of the stink. During his first assignment Nick stumbles upon something that strikes him as odd and ends up taking the two down a path that may see the end of the world. 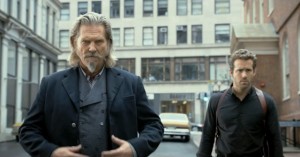 It can be uncomfortable when it appears that the actors on screen realize the low quality of the film they star in. You can nearly feel them looking to the audience with eyes that beg your forgiveness. This time around, those eyes belong to Ryan Reynolds. Reynolds is exceedingly charming and his performance can often rescue portions of films from the murky sewers of garbage. Say what you will about Blade Trinity, but I found Reynolds to be the most enjoyable part of the altogether disappointing film. Hell, I’ve enjoyed this guy since he shared a pizza place with another guy and a girl. He wasn’t just a pretty face; he had some personality. But the Reynolds on screen now seems beaten. Gone are the wry smiles, the sly humor and gentle hubris. Instead we get blank action and less than committed line readings. It isn’t fun to watch a perpetually distraught Reynolds grasping for a semblance of success. He has lost us, and if he doesn’t do something soon, he may not be able to get us back.

It may be depressing to watch Reynolds trudge through a marsh of destroyed dreams but there are other members of the cast doing just as little. Jeff Bridges is in the film, although I’m entirely confused as to why. It seems like Bridges may be playing some odd joke on us. For portions of the film it felt as if he must be laughing to himself as to how ridiculous this all is. The man has an Oscar (although so does Cuba Gooding Jr.) and has been praised for his acting on multiple occasions, so his choice to invoke a somewhat sober Rooster Cogburn lost in modern times, with a penchant for creative verbiage is more than befuddling. My only thought is that he is taking part in some Joaquin Phoenix level performance art that we just don’t get. Other than him, Mary-Louise Parker is adequately charming and Kevin Bacon is there as well. There is a lack of real commitment in any role and everyone seems to be aware of the mediocrity of the script. The script, messily penned by the same guys that gave us Clash of the Titans and Æon Flux, is not without its pacing issues or general lack of emotion, and I don’t know that I good film could have been made from it. Nevertheless, it would definitely have helped if the cast hadn’t completely checked out.

My biggest issue with the film is its aesthetic. The drug raid sequence that kicks off the action possesses an artificiality that is off putting. Rather than feeling truly cinematic it is more akin to a video game. Now modern video games can be quite amazing, so let me be clearer. It’s like a first level walkthrough, typically boring and packed with exposition, and even then it is of the most uninspired variety. It isn’t that the film looks bad, in fact all of the effects are complete and many of them look just fine. However, everything is covered in this unappetizing shine. The more it shows up, the worse it starts to look, like staring too closely at camera-ready commercial food. The film is a bastion of unnecessary camera movements. Director Robert Schwentke acts as if he just discovered the zoom feature. When he is taking a break from zooming us to death, he often spins the camera around for no apparent reason. The incessant zooming and nonstop spinning make portions of the film feel like a carnival Tilt-a-Whirl. The only thing being inspired here is nausea.

I try to find the good in everything I watch. Even in the films that I despise there is often at least one element that I can single out as worth your time. Perhaps an actor batting well above his league, a humorous line, a unique premise, or maybe a nice costume (the further you have to dig the sadder it sounds). But with R.I.P.D. I just cannot find anything that I particularly liked. The acting is fine and the effects complete but nothing is all that good. The majority of its elements are just kind of there, not glaring in their awfulness but not invoking any kind of enjoyment. The biggest detractor is the exceedingly sloppy camerawork that more than distracts from the already lackluster proceedings. Even the cast appears to be aware of the film’s low quality and are simply participating in order to pay the bills. R.I.P.D. isn’t offensively terrible and is too loud to be simply background noise; it is below mediocre and everyone involved seems to know it.