Some films get lost in the fact that they are important. Handling difficult situations and presenting stories that possess a need to be told. Their messages are overt and often force the audience to acknowledge things that they either have no awareness of or would rather not discuss. Unfortunately many of these films descend into the doldrums of self-righteousness and become so involved in their need to enlighten that they forget to put forth a worthwhile product. Fruitvale Station is certainly a film with a current and pressing message but it is done in the most expressive and emotive way, elevating the film past the mediocrity of the “based on a true story” label.

Oscar Grant (Michael B. Jordan) has a less than stellar past. A two-time convicted felon and occasional drug dealer, he is trying his hardest to put his life right. He spends the last day of 2008 gathering supplies for his mother’s birthday dinner, checking in with friends and doing what he can for his young daughter. This New Year’s Eve, Oscar hopes to forget his troubles and just enjoy an evening with his friends. While returning home on the train his past rears its ugly head and the night plummets into a dreadful experience for all. 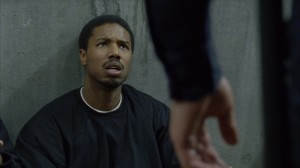 The film takes a daring first step by matter-of-factly presenting the actual footage of Oscar Grant’s detainment and subsequent murder. Cutting out just as the shot rings, nothing is said of the footage. It is simply shown as fact. This happened and this is what it looked like. I typically steer clear of spoilers in my discussion of film but Fruitvale Station wants you to know what happened even before they present their dramatization, as if to spur a conversation that will wind throughout the film. It sets a tone of interest and dread that clings to you throughout the entire runtime.

Writer-director Ryan Coogler is careful in his crafting of all of the characters. Oscar is written in such a manner as to offer many sides to his character. A young man with a strong heart but a less sure head, he has made mistakes in his life. The flashbacks to his past show a man filled both with anger and love. He speaks with such adoration to his mother, but when confronted he turns like an angered pit-bull. As he pleads for a hug you understand why his mother walks away, but it doesn’t make the moment sting any less. His bravado is overcome by a childlike need for motherly love that should be absurd in such a hard setting. The cement walls only heightens Oscar’s vulnerability. Of course the writing can only take the film so far; it is the cast that allows it to soar.

Michael B. Jordan becomes Oscar Grant, invoking the necessary strength and weakness in all of the right places. The rapid changes in tone would be difficult to handle in practiced hands so it is amazing that the young Jordan is able to make each moment feel lived in and completely authentic. This is Jordan’s film from start to finish. Neither children nor animals can overcome his screen presence. His greatest accomplishment is his ability to endear us to the inherently flawed character. Over the course of the film we have seen his demons rise within him and the overpowering love that he levels at all of his family members. He is not simply a character, but has become a full person that we know. It adds an astounding amount of gravity to his ultimate death. The difference in our reaction to the shot that takes his life from beginning to end speaks to Jordan’s remarkable skill as an actor.

Jordan only narrowly surpasses the performances that surround him. The closest in quality is Octavia Spencer as Grant’s mother. As we grow closer to Grant we come to know his family more fully and his mother most of all. She has unending love for her son but knows that she cannot simply provide for him as an adult. While Spencer systemically won over audiences with her role in The Help, eventually taking home an Oscar, this performance may just be better. Where before she was expected to be humorously boisterous, this time around she is decidedly more understated. She conveys the slightest emotions with an expressive look rather than a lengthy diatribe. Her heartbreak at the film’s ending is subtly conveyed and she maintains her strength despite the urge to fall to pieces. 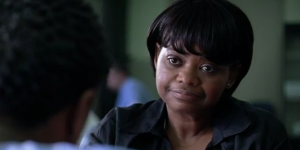 Oh, and let’s talk about that ending. The film’s final thirty minutes are harrowing and emotionally precarious. The tension, which had been gently pulsating beneath the film’s day-in-the-life surface, overtakes the proceedings. Despite being fully aware of how this all will end you cannot help but cling to some hope that the man will find a way out of it. The shock of the gunshot pounds into everyone and Jordan shows disbelief, horror and unending sadness with the fewest of words. The film isn’t exuberantly waving its message flag, although there is certainly a conversation to be had, made all the more current by the result of the recent Trayvon Martin trial, instead it just shows this event. This was a man. He had flaws but a good heart and stupidity and a vein of racism took him away. But that is a conversation to be had after you exit the theater. Coogler’s depiction of the events is so emotionally exhausting and the final gut punch will rob you of words.

A film like this tacitly accepts a degree of responsibility. Occasionally documentary in nature, it is here to not only entertain us but also to make us think. A conversation must take place and while writer-director Ryan Coogler is aware of this he is careful not to let it overpower him. The script is consistently honest and draws characters with a knowingly exact hand. Michael B. Jordan anchors the film and his portrayal of Oscar Grant is impressive in its fullness. He infuses the character with depth and his urge to make a better life contributes to the power of the film’s ending. Coogler doesn’t try to surprise you with Grant’s death, instead presenting it without fanfare before we even come to know the man. It is a testament to the film’s strength that this choice does not take away from the experience at all. Fruitvale Station is emotional draining and displays the lengths that film can take us; it is a film that must be seen.