It’s starting to look like 2013 might be the year for Michael Cera to prove that he has more to offer than his typical awkward ways. With his work on the YouTube channel JASH, a coke-filled turn in This Is The End and a decidedly more adult George Maharis (née Michael) on the fourth season of Arrested Development, we are getting a little bit of insight into the deeper, darker and altogether more complicated actor. Those that dismiss Cera based on his early work will be hard to win over, but I argue for an open mind. Crystal Fairy isn’t anything groundbreaking or special, but it and Cera’s work are certainly interesting.

Jamie (Michael Cera) is traveling through Chile. With pretentious youthful abandon he is seeking a unique hallucinogenic journey. Champa (Juan Andrés Silva), a local Chilean, acts as his guide, while Jamie plans to obtain the San Pedro cactus and cook it into a trip inducing drink. Enlisting Champa’s two brothers, Pilo (Agustín Silva) and Lel (José Miguel Silva) as co-passengers, the group heads down the coast. While at a party, Jamie meets the mysterious Crystal Fairy (Gaby Hoffmann) and in a drug fueled haze, invites her along. 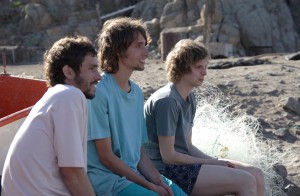 The film quickly establishes itself as one of those indies led by an entitled individual with delusions of intelligence. Jamie expounds on new age philosophy. He name drops books left and right and patronizes those that haven’t heard of them, all while possessing very little knowledge of the literary content. He is open-minded; he would love you to pass that joint, and oh, some coke, well sure, he’ll do that too. For a person that has traveled all the way to Chile, he knows offensively little Spanish and seems annoyed when others cannot provide him a translation. All Americans should fear that the world views us as Jamie; bigoted, overly self confident and waving the flag of over education without any true substance. He is a complete asshole, but I guess at least he isn’t fat. I hated Jamie for the film’s entire runtime, and now that I’ve had time to reflect, I’m pretty sure I was supposed to. Michael Cera plays dirty yet snobbish dick astoundingly well. Unlike many people, I haven’t hit my point of Cera fatigue, so for me to find him insufferable is to say he did his job well. 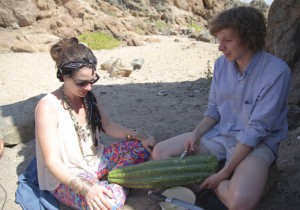 But Jamie isn’t the most interesting part of the film. That honor, somewhat obviously, goes to Crystal Fairy. Gaby Hoffman turns in a performance that reveals a deep knowledge of character and complete immersion. Hoffman becomes Crystal Fairy and it’s tough to even view her performance as acting. It forces you to look past the body hair and flippant nudity (if you had told me I would one day see full frontal from the little girl in Field of Dreams, I would have called you sick). Her introduction is quick and almost unnoticeable. The character is crunchy, a conglomeration of your most intense vegan views and otherworldly spirituality; a manic pixie dream girl, minus the dream. She occasionally gets lost in her need to be obscure. The choices to color in her character with hints of a dominatrix career, drawings that flirt with manga and an obsession with a Mayan 2012 end of days (an inclusion that already feels dated and asinine) are unfortunate. They rob the character of her inherent warmth. When you push past the energy rocks and unshaved armpits there is true humanity in the character.

Hoffman is most to thank for the more grounded and vulnerable portions. Jamie’s need to talk down to Crystal Fairy and belittle her notions of life develops into a bullying tale. Whether or not Crystal annoys you, you will feel for her. She is nothing but kindness, just wrapped in a ramshackle outfit of thrift store clothing. In the film’s final act, as the group gets to experience the hallucinogenic fruits of their labor, Crystal is forced to return to Earth. She shows true fear as she becomes lost in the desert. Her armor disintegrates and the hurt she felt by Jamie’s put-downs reveals itself. It is as if she begins to question her very way of life. The cynic within me craves to dislike Crystal, to dismiss her as some crazy and lost drifter, but Hoffman softens her hard edges and shows the good hearted humanity that is difficult to fault.

If this were some short that focused on Crystal Fairy perhaps it would have all worked. Hell, with the strength of Cera’s truthfully vitriolic performance I’d even keep him in there. But this is a feature, so the spaces between the impressive are populated with tedium. The three Chilean brothers are nearly useless. Good natured and unimposing, they are nothing more than filler, characters that lack any character depth past their descriptions. There seemingly because they are the director’s brothers and perhaps they were a part of the actual story that inspired the film. The quest for the cactus is drawn out and the actions taken to accomplish the task are more than obvious. You will spend most of the time waiting for something to happen. By the end, the good parts are few and barely explored while the useless prevails.

The audience for Crystal Fairy exists and they will most likely accept the understated and plodding nature of the film. If you manage to sit through the whole thing, there are some rewards to be had. Cera continues to do decidedly different and endlessly interesting work that laughs at his former pigeon-holing. His performance drips with condescension and his devolution into a schoolyard bully is uncomfortably wonderful to watch. Gaby Hoffman turns the ridiculous Crystal Fairy into a rounded person. The later sadness that she gently unveils is heartbreaking to watch and I found myself yearning for more of these honest moments. Unfortunately, these spots of enjoyment are few and far between. The majority of the film is spent traveling from location to location without anything of substance. It is wasteful and leaves it all feeling inconsequential. Within Crystal Fairy there is a delightful story about developing compassion and discovery, it just all gets drowned in padding to obtain a legitimate runtime.