For the past year, DEA agent Bobby Trench (Denzel Washington) and U.S. Navy intelligence officer Marcus Stigman (Mark Wahlberg) have been working under cover as members of a narcotics syndicate. The twist: Neither man knows that the other is an undercover agent. When their attempt to infiltrate a Mexican drug cartel and recover millions goes haywire, the men are disavowed by their superiors. Trench and Stigman must go on the run lest they wind up in jail or in a grave. 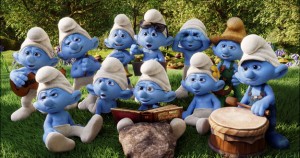 The evil wizard Gargamel creates a couple of mischievous Smurf-like creatures called the Naughties that he hopes will let him harness the all-powerful, magical Smurf-essence. But when he discovers that only a real Smurf can give him what he wants, and only a secret spell that Smurfette knows can turn the Naughties into real Smurfs, Gargamel kidnaps Smurfette and brings her to Paris, where he has been winning the adoration of millions as the world¹s greatest sorcerer. It’s up to Papa, Clumsy, Grouchy, and Vanity to return to our time, reunite with their human friends Patrick and Grace Winslow, and rescue her!  Will Smurfette, who has always felt different from the other Smurfs, find a new connection with the Naughties Vexy and Hackus – or will the Smurfs convince her that their love for her is True Blue?

After their mother escapes from Sydney to Margaret River in the 1970’s, the two Kelly brothers spend their youth searching for the perfect wave. Out of necessity the family launches a backyard surf business – re-thinking board design, crafting homemade wetsuits and selling merchandise out of their van. Battling big waves, small town conservatism and criminals, the brothers give rise to a global brand. A story of passion, corruption, friendship and loyalty, deadly addictions and fractured relationships, DRIFT tells a tale of courage and the will to survive at all odds.

With sly humor and an intensity of feeling, The Spectacular Now creates a vivid, three-dimensional portrait of youth confronting the funny, thrilling and perilous business of modern love and adulthood. This is the tale of Sutter Keely, a high school senior and effortless charmer, and of how he unexpectedly falls in love with “the good girl” Aimee Finecky. What starts as an unlikely romance becomes a sharp-eyed, straight-up snapshot of the heady confusion and haunting passion of youth – one that doesn’t look for tidy truths. Read the Review Here.

A contemporary mission to Jupiter’s moon Europa to investigate the possible existence of alien life within our solar system. When unmanned probes suggest that a hidden ocean could exist underneath Europa’s icy surface and may contain single-celled life, Europa Ventures, a privately funded space exploration company, sends six of the best astronauts from around the world to confirm the data and explore the revolutionary discoveries that may lie in the Europan ocean. After a near-catastrophic technical failure that leads to loss of communication with Earth and the tragic death of a crewmember, the surviving astronauts must overcome the psychological and physical toll of deep space travel, and survive a discovery on Europa more profound than they had ever imagined.