I have previously griped about the “based on a true story” label as well as those films that posit themselves as inherently important. It is not that I believe that all films with some factual base are lesser, or that a film with a current or “take notice” message is any way not worth your time. However, these tropes can become a crutch like any other for film’s to lean on. When dealing with the historical or current news item, your film is given some semblance of urgency. It no longer becomes a conversation over how good the film was, but how necessary our awareness of the event that inspired it. They become too busy relaying the events, rather than constructing a worthwhile piece of cinema. In the same way, these films appear to dare you to argue the quality of the film, equating a disagreement with a stance on the wrong side of the issue. Lee Daniels’ The Butler is both of these things and is too busy juggling its labels to be concerned with captivating the audience. 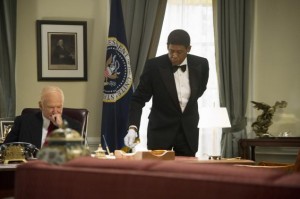 Cecil Gaines (Forest Whitaker) is a butler. However, unlike the many mansions and hotels that we imagine as this profession’s office, his is the White House. He is afforded a unique perspective on the events of the world, remaining quietly attentive over the course of 34 years and eight Presidents.

Cecil is our titular butler, so you’d expect that the film would be mostly about him. However this is not the case, rather the character is asteroid lost amongst planets. There are constant reminders that in his role as butler he is to blend into the surroundings, when he is not serving, the room should feel as if no one is in it at all. That ends up becoming his role in life. He isn’t shown to be terribly interesting, with a skill for service that is unquestioned while never truly explored. We never get to know Cecil as a person. Instead we are left to make numerous assumptions about the man. The end of his parents, death of his father, insanity of his mother; doesn’t have any notable ramifications on the man. He moves on quickly after their dissention and the occasionally fast forwarded timeline leaves his mother feeling exceptionally insignificant. It’s not that Forest Whitaker does a bad job with the role; it’s just that, on paper, there was very little for him to do. 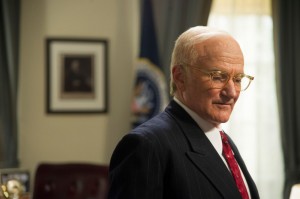 The film chooses to place civil rights as its major issue. It makes sense; the mere sight of a black staff waiting on the many white inhabitants of the White House is enough to bring up some questions. But it is all done with such little nuance. The lines are dark and bold, but the images lack any shading. You are either for equal rights or against it. The racist characters are all so powerfully racist as to be a mere hood away from the KKK. Cecil’s son, Louis, acts as our representation of a fighter for civil rights. He is abrasive, disrespectful and unappreciative of his father. He is first a Freedom Rider and then a Black Panther. It’s all just so confused. He changes his ways seemingly so that we can get a view of the different groups and mentalities that fought for civil rights. It’s a strange combination of strong convictions and mutable sensibilities. It makes him appear more lost and rebellious of his father than as a man fighting for what he believes to be right. The film is littered with stereotypes that do a disservice to the message. The civil rights movement was a tumultuous time in our country’s history and an honest discourse would benefit the collective education of a people becoming blind to their past. It is important to show how racism was casual and accepted with some taking actions past the point of inhumanity. However, the film has outlandish, stubborn villains that represent the most extreme and doesn’t contribute anything of substance to the conversation. 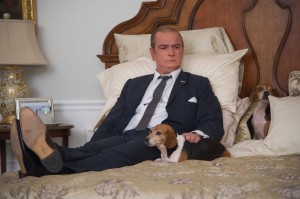 ther than its generalities the film displays a wanton disregard for actual history. Of course, it does seem petty to gripe with a biopic over its depiction of events. Nevertheless, I urge audiences to seek out the original Washington Post piece that inspired the film. The real life Eugene Allen shares little with Cecil Gaines besides a deep devotion to his own job. The numerous events of his surrounding life are altered to heighten his importance. The original article is so very different than the film that it would seem that Eugene Allen would simply be a coworker of Cecil Gaines rather than his inspiration. The film about Eugene Allen’s life just may have been a little too boring. Gone are the Black Panther son and emotionally distraught wife, in its place is a hardworking man with strong devotion to everything within his life. Yes, its endemic to the film’s biopic nature, but other than its base similarities, the life onscreen feels like a near complete fabrication.

Much of the acting is quite good, with Oprah Winfrey most likely winning the majority of the accolades. Her performance as Gloria Gaines is convincingly complex and the one character that can be both redeeming and flawed. The many Presidents that pop in to act out their requisite important to civil rights moments are terribly miscast. Appearing as stunt casting, the audience realization of who is portraying each figure becoming more important than the performance itself. They are trying, with derivative impersonations and plenty of makeup, but other than James Marsden who just makes sense as JFK, they bring nothing to the proceedings.

The film is just too self interested to be good. It has its message and its idea of how events occurred. They are cut and dry and without any nuanced authenticity. As it devolves into political musing and a borderline disrespectful representation of history, it forgets that this is to be a film about its titular butler. Perhaps the changing of the film’s name from The Butler to Lee Daniels’ The Butler, the result of Warner Brothers’ apparent concern that it would be confused for their 1916 silent that no one had heard of, is fitting. Character is not of importance to Lee Daniels’ The Butler; it is far more concerned with its own ideas and the name dropping nature of its cast list to be bothered with truth or quality storytelling.