The blockbuster season got you hating on English-language films? I get it. August tends to be filled with some pretty lackluster fare. That’s where Foreign Friday comes in, offering up a smattering of international cinema to break up the monotony. Ask a little bit more of yourself and read some subtitles. No swords or blood here, this week we will be on the search for some laughs, stopping in not one, but two countries, hopping between France and Finland with Let My People Go!.

Ruben (Nicolas Maury) is living happily in Finland with his handsome boyfriend Teemu (Jarkko Niemi). Right before Passover Ruben’s life gets thrown into upheaval when a pack of money is refused by its recipient and forced upon him. As he returns home with the money, it sparks an argument with Teemu. Heartbroken, Ruben returns to his family in France. It’s just too bad that he went to Finland specifically to escape his family’s crazy ways. 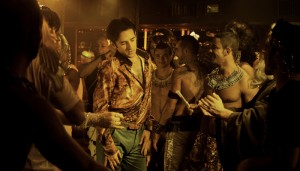 The film starts off quite strangely. The money is given great importance, which is fair, since it puts Ruben’s move into motion, but even as MacGuffins go, it is shockingly undeveloped. We are initially led to believe that this money will play some part in the major story, but other than acting as the impetus, it is more or less forgotten. At times the director has Ruben express some worry over the money, but as the film proceeds he plays it exponentially less mind. It is a poor choice on the writers’ part. There are other ways to have the two quarrel in order to get Ruben back to France. By introducing the money they only complicate the film for themselves when clearly they care little about it and just want to get into the meat of the relationships. It is a distracting play that unfortunately places the film on immediately poor footing that it spends the rest of its runtime trying to overcome.

This is endemic to the film’s weakest conceit, going as broad as possible before getting good. All of the interactions are 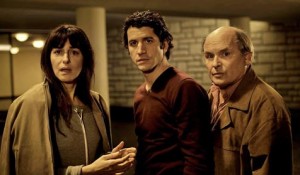 played to outlandish levels. Every character is presented as a brief representation of their archetype, the overbearing mother, the annoyed sister, the hardworking, yet also annoyed, brother and the quietly powerless father. These are horrible first impressions for the film to make. As the money subplot fades into the background, it becomes evident that we are going to be spending a lot more time with this family. Clearly, it’s the relationships that director Mikael Buch wants to discuss. But his caricatures are so off-putting and generalized that this realization inspires dread rather than excitement.

Once we get past this rigid outer shell, the film begins to open up quite nicely. Each character begins to deepen and reveal himself. Everyone is inherently flawed, and regardless of their interpersonal relations, have some deep-seated issues to deal with. Ruben, who initially looked to be in such shambles, begins to appear more stable than his subtly crumbling family. They all approach him as not only family, but some kind of outsider that they can confide in. Despite all of the terrible issues, which go as far as infidelity, none of it ever feels mean-spirited, a testament to the actors and the bonds they convey on film.

The broken pieces of this family, while often taken to ridiculous levels, are exceptionally grounded and authentic. If labels were a necessity, this film would be forced to carry homosexuality and the Jewish faith in the forefront. However, Buch strongly asserts that these are mere labels with little meaning. The family is Jewish, but this only informs the holidays they celebrate rather than the people they are. Additionally, the fact that Ruben is gay, although initially appearing to revel in stereotypes, evolves past this. His relationship with Teemu is as average and complex as the many heterosexual relationships within the film. When Buch pushes aside the more simple definitions and digs into just how similar we all can be regardless of the labels society imposes upon, the film begins to soar, the laughs come more frequently and everything is communicated with much stronger emotion and conviction.

In our social media minded world of keywords and hashtags, we are becoming a bit dismissive. We ignore our own advice “to not judge a book by its cover” and do just that. It is invading many aspects of our lives, and for the film fan, is ever present on Netflix. If one were to search Let My People Go!, the first genre that comes up is Gay & Lesbian, and that is exceptionally limiting. Film is a complex medium that often pushes against its own rampant pidgeon-holing. Yes, many of the characters within the film are homosexual, but that is hardly the point. It is a film about the relationships within our lives and not only the genuine humor that can arise from our own frustration, but the universality of our troubles. The film begins by playing into the hand of stereotypes, but as it proceeds so does it establish itself as much more than a label. Let My People Go! is initially a mess, with broad characterizations and humorless dialogue, but during its short runtime it becomes something much more. Underneath its cold, sour surface lies a warm, funny and sweet film with a good heart.