Remakes of cult films have a tough sell.  In the hearts and minds of those whose almost-daily conversational lexicon include references like, “This is my boomstick!” or “Lady, I’m afraid I’m going to have to ask you to leave the store” or “Workshed”, it’s an uphill battle to convince them that your remake is either a worthy addition to the canon or is a skilled enough diversion to warrant them putting their energy into watching the film and just not knee-jerk react to Hollywood’s now-feverish case of remake-itis.   Sure, for a producer’s perspective, a remake of a cultural cornerstone (regardless of how niche it is) almost guarantees cash.  But if you’re the filmmaker, you’ve got the unenviable task of showing that your revision is worth the red pen you’re using to mar the original.  Your final product not only needs to be a good movie, it needs to exceed the original and expectations.

I’m talking, of course, about 2013’s remake of the cult horror classic, Evil Dead.  The original film, which spawned two sequels, is part of pop culture’s psyche thanks to Sam Raimi, Rob Tapert, and Bruce Campbell’s low budget, let me display my bias here, awesomeness.  The lack of money, as it so often does, led to inventive camera angles, tense atmospheres, legitimate scares, the formation of a signature directorial style, and a from -there-on mimicked horror style that burrowed into the minds of viewers across the globe.  While the sequels can be argued to have taken on more of a pop culture significance with its increasing humor and gradual change in direction towards fantasy, those who admire the trilogy (Evil Dead, Evil Dead 2, Army of Darkness) look back at films and say, “The original Evil Dead was the legitimately scary one.”  All of this is to say that Fede Alvarez, the man charged with bringing this updated version to the masses, had his work cut out for him. 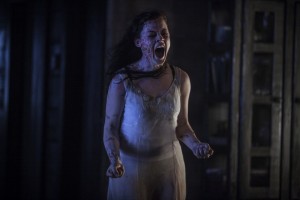 Although to be fair, one has to judge Evil Dead on its own merits.  This movie might come wrapped in history for some, but it has been a good long 22 years since the original hit theaters, meaning this film will be new to a younger generation.  Fortunately, for both the new and the in-the-know crowd, 2013’s Evil Dead actually stands well on its own.  While the film does pay ample homage to its predecessor with familiar shots and visual references (What Evil Dead trilogy fan’s heart didn’t race when we first laid eyes upon the chainsaw?!), it’s also a horror film whose confidence helps secure a standing in the genre.  I think almost all of that confidence can be attributed to Fede Alvarez, whose direction made the film’s 90 minutes pass by quickly and gruesomely.  Evil Dead’s horror comes from gore and the occasional jump-scare, and in that execution Alvarez has proven himself to be a strong filmmaker.  And in his lead actress, Jane Levy, Alver has a strong enough anchor to tether the story as the demonic spirit possesses her and begins the torturous adventure of dispensing with the 5 inhabitants of that fateful cabin in the woods.

Evil Dead’s story is probably familiar if you’ve seen the original or any of its countless imitators, but here we go: Mia, a heroin addict, is taken to a remote cabin in the woods by her friends and her estranged brother to kick the habit.  After a ceremonious dumping of the smack into a well, they find themselves killing time while Mia toils through detoxing.  This time killing includes heading to the basement, uncovering the ancient Sumerian Book of the Dead, and ignoring all of the book’s warnings to not read the incantation out loud and reading the incantation out loud.  And thusly, the timer is started and the cast frantically scatters about like a class of kindergartener’s trying not to be tagged in a game of Tag.  Only, in this case, the person who is “it” is a horrifically evil force that plays really, really well and for keeps. 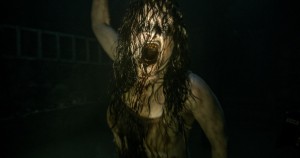 And really, if Alvarez had taken that heroin detox idea and seen it through, it would have elevated Evil Dead to great instead of leaving it at just surprisingly good.  Not that surprisingly good is all that bad a label.  If you’re in the mood for a really well executed but stock story about evil trying to make everyone dead, Evil Dead is one of the better ones to watch.  But if you’re looking for an original story, you’re probably not surprised that you’ll want to look somewhere other than a remake.