You know that you should watch more foreign films, but you have no idea where to start. It’s going to be okay, Foreign Friday is here to be your leader. Let LonelyReviewer do the necessary digging to let you know not only what’s out in the cinematic world, but also if it’s any good. Sit down, relax and get ready to read some subtitles. This week we take a casual stroll to the Great White North, that’s right; we’re going to Canada with the sweetly moving Monsieur Lazhar.

Simon (Émilien Néron) and Alice (Sophie Nélisse) are happily playing at recess until Alice reminds Simon that it is his day to get the milk. As he is approaching the classroom with the crate of milk he finds the door oddly locked. Upon looking inside he notices something horrifying, his teacher has hanged herself. The following days are filled with psychologists and tears. The school’s principal, while dealing with her own emotional distress, is having a hard time

locating a worthy replacement. That is until Bachir Lazhar (Mohamed Fellag), an Algerian immigrant, happily strolls into her office. With few options, she hires him. While the students deal with grief, Monsieur Lazhar tries his hardest to capture their attention and move them forward. Meanwhile, he is dealing with his own loss.

As a student, you often lose sight of the humanity of your teachers. Especially in our more youthful times, we regard these pillars of education as some sort of alien being. We imagine them confined to the school grounds feasting on the homework that we begrudgingly provide. They certainly don’t have emotions past annoyance at our own insubordination and forget an actual life outside of the brick walls. They are teachers, and that is all. A progression to adulthood reveals that this is far from the case. Some herald teaching as a calling, but more truthfully it is a job. Yes, they have heavy responsibility, deep scrutiny and are criminally underpaid; but at the end of the day, they experience much of the same occupational weariness as any employee. Writer-director Philippe Falardeau’s film ably illustrates this differing expectation and the difficulty in residing astride these mentalities.

The opening of the film, quietly presenting the colorful classroom with the macabre dangling body, sets a tone for the rest of the film. The death is invasive and unfairly forced upon the children. The teacher is often discussed as being well liked, so her choice to tarnish the institution with her deeper issues is baffling. She is hailed as possessing a love for teaching and the children, but has created a great wound on their lives. As everyone attempts to move on, the suicide remains a darkness that clouds the remaining year. Lazhar, an outsider to both the school and Montreal, is perhaps the best conduit through which to spurn the need to carry on. The children are unable to separate Martine’s personal and professional life, understandably grasping an undeserved blame. As the audience is shown the troubling aspects of Lazhar’s life, we see that he is able to do what Martine was not. These children have no business in his troubles, they are his own and meant for him to deal with. When within the school walls he is there to educate and support, and it’s just too bad that Martine didn’t realize that. 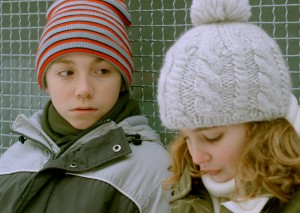 The acting across the board is superb. Fellag crafts Lazhar into a tragic character with a deep love for knowledge. Despite the pain he harbors, he only looks to help the children. The performance is multifaceted, mixing in precise amounts of confusion, understanding, sadness and joy, making Lazhar not merely an authentically fascinating man but also a great teacher. The film’s success hinges on the ability to connect and feel for the children. Falardeau is smart in showing the children to not be mere archetypes but fully developed people. They struggle to cope with their own sadness and guilt. Sophie Nélisse fulfills the role of model student, and while her relationship with Lazhar flirts with the overly sentimental, it stays on the right side of genuine. More interesting is her relationship with Émilien Néron’s Simon. Their friendship is ravaged by the suicide, and it is disheartening to see him act out as he believes his classmates hate him for Martine’s death. Simon’s explosive admission of his inner feelings is heartbreaking and entirely because of Néron’s performance. The film progresses rapidly, fast-forwarding the school year, but the performances maintain believability. Although we may not spend much time with the class, the relationship between the students and teacher is honest and sweet. They become closer and all begin to trust each other. It is a testament to great teaching, a love letter to those teachers that can make a difference, for to reestablish trust after the ultimate betrayal is no mere feat.

Schools are oddly dismissed and revered by society. We recognize the importance of education, but fail to properly monetize the positions or respect the inhabitants. This isn’t just the teachers, but the students themselves. Children, in all their mess and wonder, are thought of as lesser. We see them as annoyances and undeserving of respectful attention. Nevertheless, when faced with adult situations they often deserve more credit than they receive. In Monsieur Lazhar, the school forces these psychologists that speak in generalities and spoon feed approved thoughts onto the student body. The film shows that these aren’t just a mass of changing minds, but individuals that require more than lectures. Lazhar represents that great teacher, who recognizes that students are just smaller people. They have complex emotions and ideals that need to be expressed. Monsieur Lazhar is a fantastically assembled film, with simple yet gorgeous visuals that boasts more than its share of wonderful performances. It mixes its sadness in with delight, and is not only a wonderful film, but a great argument in favor of the teacher’s role; displaying how the right person can not only educate but foster connection and growth.