What is Boston Open Screen? Imagine an Open Mic Night, but for film and video. For the past 10 years, Boston Open Screen was, and still is, the only truly open venue for filmmakers to screen their work freely. The only limits they have is that the work has to be under 10 minutes, and they are prepared to play almost any format. In this day and age, the internet is unfortunately the only place where folks can screen work openly, and its great to see forums like Open Screen allowing filmmakers to screen there films before an audience, there simply is nothing that can replace that experience.

The Boston Open Screen has seen many venues over the years, and is coming back this season to the Coolidge Corner Theatre. Sign-ups for those screening start 30 minutes before show time, around 7pm. You sign up for a slot, and the show begins at 7:30pm. Tickets are purchased at the door, for $7 (the absolute cheapest they could make it!).

Even if you aren’t planning on screening anything, Boston Open Screen is guaranteed to be a fascinating night of entertainment. 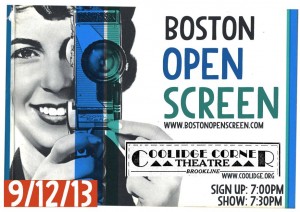