Foreign languages scare you. They require such devotion. At least when you see an awful English language film, you can distract yourself with other things, while it drones in the background. Foreign films demand your constant attention or else the subtitles will vanish before you get the chance to read them. I get it. Reading is hard. Foreign Friday is here to offer you a weekly morsel of international cinema. This week our journey takes us to Spain with The Last Circus, a strange film that will assuredly not help with your deep seated fear of clowns (don’t pretend to be strong, clowns freak us all out).

After leading a life of perpetual sadness, Javier (Carlos Areces) has given up his dream to follow in the funny clown footsteps of his father. Refusing to leave clowning entirely, he becomes the sad clown at a small circus. The circus is ruled by the domineering Sergio (Antonio de la Torre), the crude, arrogant and violent funny clown. He inspires fear in the rest of the performers and frequently belittles and strikes his girlfriend, trapeze artist Natalia (Carolina Bang). When Javier refuses to laugh at one of Sergio’s jokes, Natalia begins to take an interest in him. Unsure of her interest and terrified of Sergio, Javier begins to lose a handle on his emotions and sanity. 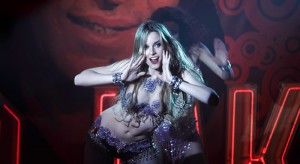 So things got kind of weird this week. The Last Circus is a film that laughs at your expectations. Most of the marketing material for the film uses a picture of Javier at his most unhinged. The poster features a horrific homicidal clown decked out in all of his glittery Rambo glory. However, as the film starts, he is nowhere in sight. That’s because the film squeezes a plethora of different genres all into one style. It starts as a war film, then transitions into an emotional piece about bullying and love before it goes bat-shit insane and just starts blowing everything up. Rather than adhering closely to the storied three act structure, it feels more like three barely related films with common characters. Time appears to be relative, and in general, it can be slightly difficult to follow, let alone understand.

It lost me when it lost itself. The beginning is quite fantastic. Set against the backdrop of the Spanish Civil War, we are thrust into the circus audience to enjoy a comedic clown performance. There are hints at something darker, but for the most part it is about these two clowns milking as many laughs out of the audience as possible. When the film takes a quick left turn and has soldiers barging through the tent walls to involuntarily recruit the performers, it worked. The image of circus performers charging into battle without even donning uniforms is darkly comedic. Director Álex de la Iglesia captures the enemy’s terror at seeing a clown slice through your compatriots with a machete. It is ridiculous but absolutely nightmare inducing. The war action is shot well, although it does indulge in some Zack Snyder level slo-mos, and is captivating enough to distract from the copious CGI-blood (sometimes I really miss the world of squibs). As enjoyably violent as this segment is, the film begins to realize that it should tell a story, so it ropes in Javier, the machete wielding clown’s son, to add some emotional weight. It’s just too bad that none of us really care about him. 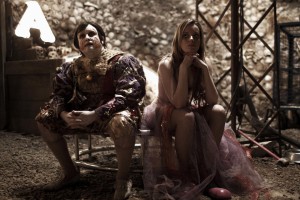 After playing a bit more in the Spanish Civil War sandbox, the film undergoes its first temporal leap, because if we are going to have a film about Javier, it better be him as an adult. The new circus sections definitely increase the film’s descent into the dark. However, this is only the midpoint at a much longer crescendo. Iglesia doesn’t really bother with establishing many of his characters, to the point where I have trouble simply remembering their names. Outside of the three leads, the characters possess mutable sensibilities and emotional reactions that exist seemingly only out of necessity. Sergio sets the film on its path of destruction, not only cinematic but also of quality. He is every stereotype of womanizing and abusive. The chauvinism he displays hints at a deeper chauvinist tendency of the film as it continues. Natalia is the worst kind of female character. She is unsure of whether she is confident or not, and her persistent need to stay with Sergio is barely explored. Her need to be with him is superficial; I mean he is the coolest guy at the circus. It’s hard to understand why she would continue to return to the eternally abusive Sergio unless Iglesia is simply stating that women are weak, needy and indecisive. It’s a wickedly dated sensibility and the chauvinism overpowers whatever else occurs.

The less spoken of the Javier-goes-crazy storyline, the better. Iglesia seemed to have no idea where to take the story next, so he instead just let everything go nuts. Javier’s descent into madness is sudden, out-of-character and barely explained. The fact that a connection to his father is shoehorned in, is offensively convenient. Sure, the visuals are interesting, with Iglesia channeling an unhinged Tim Burton on his darkest of days, but to what end? This is violence for violence’s sake. Any connection established in either of the two preceding parts is abandoned and the bullets just start flying. Our leads fall to pieces and the only characters possessing any redeeming qualities are utterly forgettable. The Last Circus simply runs out of steam and instead of coming to a conclusion, decides to throw every bit of ridiculous at the viewer in hopes of distracting from its lack of vision. The film is absolutely excited to show you just how dark and crazy it is willing to go, but it leaves you yearning for the simpler and more emotionally relevant sections that it abandons.