Here on LonelyReviewer, it is our mission to continually explore all that the film medium has to offer. Foreign Friday is our weekly journey into the realm of the international, putting aside our smart phones to focus more completely on the big screen and the subtitles running along its bottom. Plumbing the vast caverns of Netflix, we confuse the robotic recommendations as we go for something outside of the English language. This week, our journey takes us away from narrative features and into the area of the real with a documentary. Join us on a trip to Israel and Palestine for the revelatory 5 Broken Cameras.

In 2005, Emad Burnat, a Palestinian villager welcomed his fourth son, Gibreel, into the world. His first camera begins with humble hopes, little more than a method to document Gibreel’s growth, but soon Burnat turns his camera elsewhere. In his village of Bil’in, Israeli forces have begun the construction of a barrier to separate Bil’in from the Jewish Settlement of Modi’in Illit. The construction involves the seizure of vast amounts of Bil’in farmland and the decimation of the existing olive trees. The Bil’in villagers resist and Burnat is there to capture it all. Over several years and the destruction of five cameras, he documents the efforts of the resistance and the increasingly violent Israeli reaction. 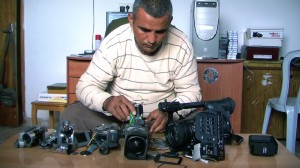 The situation on the West Bank is severely complicated and an incredibly touchy subject. There are religious implications, extreme violence and a storied history, making it all the more difficult to discuss diplomatically. 5 Broken Cameras is smart in its handling of the subject. Rather than digging into the politics or hot button issues between Israel and Palestine, it focuses on the human aspect. For all intents and purposes Emad is shown to be an average Palestinian villager. He is part of a larger community that survives because of its many inhabitants. Families are built on strong relationships and the community is there to help itself. In this personal point-of-view, a deeper connection that is capable of crossing oceans is established. We understand family. We know how these things work and can grasp the familiar desires of the many villagers. It isn’t a Jewish versus Arab debate, but rather a conversation on the perseverance of family and community. 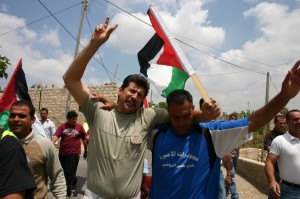 As the film moves from demonstration to demonstration it feels appropriately repetitive. The audience gains an unspoken familiarity through the repeated interactions with the Israeli forces. The villagers continually approach the demonstrations from a nonviolent perspective, and their unwavering devotion to the cause highlights the gradual change in the reaction of the Israeli forces. Tear gas canisters fall closer and gunfire becomes more frequent. The situation crumbles like Burnat’s many cameras, and the village is mired in bloodshed and destruction. The film is not comfortable in showing the opposing forces as merely faceless villains and the quieter moments begin to show more complexity. As families cross the barrier, the forces are humanized in their casual interactions with the children. The distance between the two sides remains, but a small window is opened to reveal the people that pull the trigger. 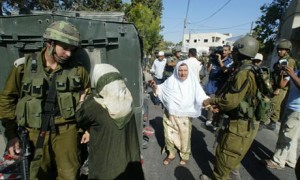 This film certainly will not fix the situation on the West Bank; there is far too much history and politics involved for that. However, it is able to offer further shading to what is actually occurring. The western ignorant perspective is one of terrorism, but what 5 Broken Cameras is sure to show is that these are people. The demonstrations have become part of the villagers’ existences. This is commonplace for the children, as Gibreel quickly learns how to say “wall” and must face death far earlier than any child should. The stakes are simply far too high for them to give up. This is not some disagreement that has arisen, the villagers of Bil’in are having their land taken from them and their homes forever changed. They strive for a return to normalcy, something that slips farther away with every day that passes. The film acts as a reminder to the uninformed that these people, no matter how far away, are still people. 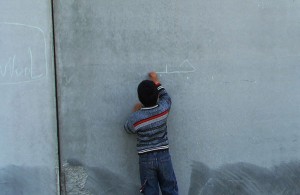 A humanizing documentary that offers insight into an eternally complicated and deeply emotional situation, 5 Broken Cameras handles so much in its limited runtime. Its amateur and less-than-polished camerawork only further grounds the film. It possesses the familiarity of a home movie, with Emad Burnat filling the role of excitable father. The film offers humanity to an inhuman situation. While it does its best to handle the tough hand it has been dealt in a manner that is fair without disregarding emotion, it also serves as an argument for the strength of film. Burnat’s many friends lead the demonstrations with passion, strong speakers that have no other way to express their feelings than to shout them loudly and bring their people along in chorus. Burnat is much more soft spoken and ultimately uses the camera as his way of contributing to the cause. He fights just as Phil and Adeeb do, and makes his mark in an everlasting manner. 5 Broken Cameras ends as it began, with Burnat surveying the many causalities of his struggle. However, now the presence of a sixth resilient camera is highlighted. The fight will continue and that alone is an apt metaphor for the film, a mixture of depression and hope.