Television and film comedies are beginning to look awfully familiar. Rather than a sharp divide between the two, actors are seamlessly hopping between the two mediums. The stigma associated with the small screen, and having it be merely a springboard to features is diminishing. For every Steve Carell that moves on to focus on film, there is a Paul Rudd or Kathryn Hahn returning to television to flex some comedic muscle. A.C.O.D. certainly reaps the benefits of the televisual-cinematic blurred lines.

Carter (Adam Scott) is doing just fine. He is seeing success in all parts of his life, from a well respected restaurant that he owns and runs to an accommodating and gorgeous girlfriend. When his younger brother makes him aware of his recent engagement, Carter finds it difficult to be excited. Having grown up a child of divorce, and with his parents having one of the ugliest divorces on record, he has trouble understanding the benefits of marriage. It is made all the worse when his brother informs him that he wants to have a wedding in which both of his parents attend. Forever the mediator, Carter is forced to bridge the tremendously volatile gap between his mother and father. 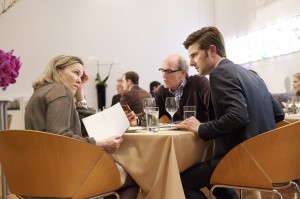 There is an impressive comedic pedigree on display in A.C.O.D. (and yes those periods make typing the title a frustrating burden, so appreciate the sparing use of it within this review). It’s one of those films that has you excitedly smiling as each new character is introduced, unless trailers have already bathed you in so much cast list indulgence that it’s all existing knowledge. Most of the actors are filling their practiced go-tos, Richard Jenkins as dickish father, Catherine O’Hara as grating mother, and Clark Duke as general stand-in for a stereotypical representation of Generation Y (are we still on Y?). The performances aren’t surprising, but the heaps of practice that everyone has at least guarantees some solid laughs. It feels somewhat wrong to quibble that Adam Scott plays an awkward and increasingly befuddled success amongst crazies, his absolute standby; but in all honesty, few do it as well as him. You will be far too busy appreciating the actors’ performances to be bothered with questions of pigeon-holing. 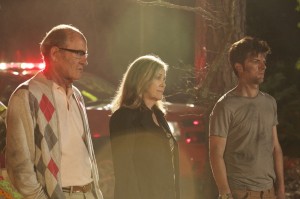 You won’t find me arguing that Jane Lynch is not funny, or that the mere presence of Amy Poehler does not make everything better, but as solid as the performances are, they really don’t have a whole lot to play with. Just as Lynch’s character excitedly declares that these adult children of divorce (for that is the reasoning of the title, not just premium VOD placement) are the first generation to grow up so neglected, director Stu Zicherman tries to assert that his film is just as unique. It just really isn’t. The intelligence of the humor degrades as the film progresses. The beginning of the film is strong with solid jokes that are smartly written, but by the end, the film has changed entirely. The actions of the characters are increasingly alien and some moments are included with little understanding as to why.

The purpose of the film becomes lost in its attempt to check the requisite boxes and pull together a semblance of a happy ending. There is just too much going on to allow for anything to come to completion. The existence of the book that eventually provides the title of the film is incorporated to provide an idea of a message that is never fully realized. The additional subjects, despite being played by recognizable actors, are left empty and underutilized. There is enough story with Carter’s family to fill the runtime, but Zicherman and co-writer Ben Karlin are distrustful of its strength. Instead of getting into the meat of the family structure and the complexity of Carter’s delusions and damages, they fall back on sight gags and obvious twists. The laughs dwindle in frequency and the plot becomes convoluted with many threads left dangling and unresolved. It’s like watching a promising student neglect his studies in order to fit in. 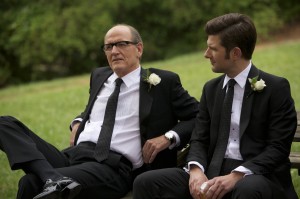 The quality and quantity of comedic actors working today is exciting. Not only do they provide consistent laughs, from screens big to small, but they vary so widely in range as to allow for any audience to find their personal favorites. A.C.O.D. is filled to the brim with high-caliber comic actors. Adam Scott not only convinces as Carter, but deftly carries the entire film on his back, silencing any that may question his ability as a leading man. All of the actors are at the top of their game, and the film starts off strong, with an initial thirty minutes that is both smart and funny. However, as the film carries on, the assertive voice becomes quieter and it hops off the rails. The unique voice established by Zicherman and Karlin is diluted by derivative plot contrivances and a lack of faith in the strength of the material. A.C.O.D. is quick out the gate, but eventually spirals downward, with only the strength of its highly talented cast saving it from abject mediocrity.