In the current climate of remakes, reboots and sequels, it was only a matter of time before we got to Carrie. Sure it was remade as a garbage television film in 2002, there was a sequel that should never be spoken of, and, strangely enough, two musicals; but this is the first full-on theatrical remake to hit the big screen. However, unlike the reimagined Nightmare on Elm Street or Friday the 13th, Carrie was a standalone film with a firmly closed ending. Perhaps the ongoing bullying debates allow for an opportunity to do something more with the film. Maybe there is more to say, or a different way to position it within our post-Columbine context.

Carrie White (Chloë Grace Moretz) is a loner. Seemingly unable to avoid aggression, she is an outcast in all aspects of her life. Under the ever watchful eye of her hyper-religious mother, and unable to find a single friend in the battlefield that is high school, she processes most things internally. In her senior year, the negativity reaches a zenith, as Carrie confusedly deals with menstruation and judgment. Something deep within pushes against the adversity, and it turns out that she may have more power than anyone could have ever imagined. 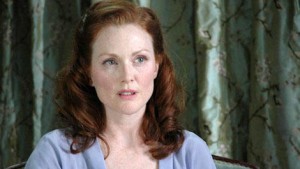 You would be hard pressed to find people clamoring for this film. The original is celebrated as a classic of the horror genre, bolstered by fantastic performances from Sissy Spacek and Piper Laurie, who were both subsequently recognized by the Academy. It remains an iconic part of not only horror, but film canon, capturing the horror inherent to the judgmental high school hallways. But here we are, facing an unwanted but completely real remake. While the casting of the two major roles offered some hope, with Julianne Moore and Chloë Grace Moretz being more than competent actors, this Carrie does little to
assert its need for existence.

The film suffers much of the same problems of most modern remakes. There is an over polish to it all, a simplification of high school life into the haves and the have-nots (admittedly, this divide was just as present in De Palma’s Carrie, although to a lesser extent). We recognize the differences in social status not because we see them, but because we are told about them. Instead, in the hope of creating this rift, everything is ramped up to hyperbolic extremes. Every student is well put together, with flawless skin and strong voices. This CW-ification of high schools is alienating. Character development is a foreign concept; instead we are instructed to understand these books entirely by their covers. With this surface-level definition, it certainly isn’t helping matters that Chloë Grace Moretz does not look much different than the other girls, regardless of any amount of pale makeup and shapeless dresses.

Perhaps the most disappointing aspect of the film is that it doesn’t say anything new. Director Kimberley Pierce seems confident that this is the time for a new Carrie, but what she delivers is in direct contradiction with that assertion. Writer Roberto Aguirre-Sacasa clearly uses the 1976 film as his basis, with only the slightest further exploration of Carrie’s telekinesis. The beats are the same and the changes that are made hardly make the film stronger. In fact, while the original posits Carrie’s attack as a mental break from years of abuse, this time around it is much more vengeful and sadistic. She appears to take pleasure in inflicting complicated pain on those that wronged her, or at least those that are friends with the ones that wronged her. In a certain way, it condones her actions, for Carrie is just attacking those that were mean to her, as if to say it is all right as long as she does not wrong the innocent. Pierce is confident that bullying is wrong, but she doesn’t know what else she has to say about it. In fact her earlier work, Boys Don’t Cry, resides as a clearer examination of the mental anguish that accompanies bullying. At this point she has lost sight of the message altogether, substituting shallow 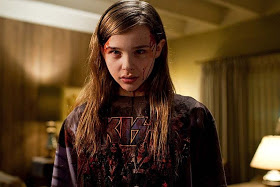 characters and laughable dialogue where a bit of pathos would’ve been nice.

The trend of remakes for remakes’ sake is resulting in a cheapening of film as a medium. These heralded classic are being reprocessed and simplified to the point of disgust and this new Carrie is just another in a long list. The filmmakers tout such deep respect for the original pieces but fail to communicate this on screen. It is tough to determine if it is laziness or a misplaced quest for larger appeal, but either way, less care is put into the crafting of these stories. Kimberley Pierce’s Carrie cannot live on its own, it will forever be tied to its far superior predecessor, and the only success it will receive is based off of this connection. The inept script beguiles common sense and inserts unnecessary pop-culture references with the only result of immediately dating itself. In the process of recreating moments from the original, the meaning is lost along the way, resulting in a polished and empty shell. Each moment is obvious and the thought of deeper subtext is nowhere to be seen. Sure, the action is more intense and grandiose in its depiction, but new toys do not make it worth your time. Carrie is a cheap knock-off, a poor impression of a far better film. Do yourself a favor and just rewatch the original.