When you fill so much of your spare time watching movies, keeping track of everything becomes somewhat of a daunting task. Luckily with ever advancing technology and a swath of developers that are keenly aware of how much the pop culture consuming public just wants to keep track of what they are doing, occasionally to the point of obsession, we are offered a bevy of tools. I personally cling to Letterboxd to provide the answer to that omnipresent question of, “did I see that?” This forgetfulness that accompanies movie watching is linked directly to overriding quality, and in all honesty most years are just overflowing with the unspectacular and rapid passing. In the coming months, I will certainly need a reminder that I actually saw Philomena. 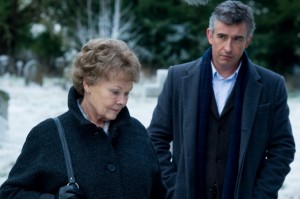 Martin Sixsmith (Steve Coogan) has hit a bit of a rough patch. Having just lost his job as a Labor government adviser, he is treading water professionally and personally. Despondently attending parties with people that seem to celebrate his failure, he unenthusiastically attempts to plan his future. Even he seems unconvinced by his aspirations to write a book on Russian history. With few options, he decides to entertain the possibility of returning to his first profession, journalism. After a chance encounter, he is brought into contact with Philomena Lee (Judi Dench), who has a story that even Martin’s dismissal of human-interest pieces can’t ignore.

At the center of the film is the relationship between Martin and Philomena. It propels the story forward and is the reason any bits of it work. With Philomena quite Martin’s senior the easy relationship is one of maternity, so it is a breath of fresh air that the film steers away from this…for the most part. The relationship edges right next to friendship while always maintaining a businesslike formality. It is a welcomed touch of authenticity, encapsulating the awkward environment that accompanies interactions between the older generations that do not share relations. With the slightest misstep it could devolve into a Driving Miss Daisy rehash, something I continually feared. Despite the genuine emotions that grow as the film progresses, at times it comes off as little more than a buddy comedy; Coogan, annoyed and cynical, paired with Dench, optimistic and wide-eyed. The reason it works is completely because Coogan and Dench work so well together.

The two actors share such honest chemistry that we forgive the simplicity of some of the interactions. Dench imbues Philomena with enough complexities and complete earnest that I look past the derivative nature of her never leaving Ireland. The way she marvels at Martin’s BMW is a moment from a much lesser film, that is only saved by the way Dench makes it so believable. Few do dry British wit as well as Coogan, but it’s what we’ve come to expect, and Philomena does not see him breaking any new ground. He is mostly on autopilot, with his typical quip-laden cynicism, and before Philomena is introduced, the character is insufferable. Philomena softens Martin to the point of being at least palatable, and it is nice to see how the relationship naturally germinates. While a film can survive on the strength of its central relationship, unfortunately for Philomena, without much more of note, it will definitely not thrive. 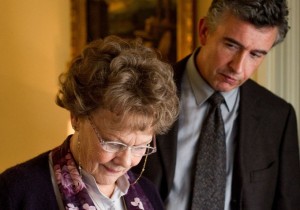 The story, while not devoid of its deeply emotional moments, feels too familiar to be great. The requisite story beats are there, and you can see the nearly mandated character growth telegraphed from a mile away. In a discussion of literature, Philomena fawns over the novel she just completed. She quickly recounts the tale, encompassing the story in its entirety, as we squirm in discomfort with Martin at its simplicity. The real problem with this is that the film itself is as shallow and simplistic as the novels its dialogue lampoons. Director Stephen Frears is not concerned with wowing us, or even moving us to anything deeper than a momentary smile. There are many pleasant moments and a few spots of true emotional catharsis, but they have little staying power. Even as I exited the theater I had trouble remembering specific moments, were it not for my trusty notebook, this review would certainly have had trouble coming to fruition.

Frears has been playing in this field a lot lately, delivering films that are adequate yet unexceptional. Philomena falls into the ranks of Chéri, Tamara Drewe and The Queen, features that are little more than fine to great performances existing within a cocoon of the utterly forgettable. The script from Steve Coogan and Jeff Pope, while mostly unremarkable, makes for a pleasant and occasionally quite funny experience. Coogan and Judi Dench work well together with chemistry that saves the film from complete ruin. Dame Judi Dench in particular is able to elevate the eternally optimistic Philomena past broad senile joke to an emotionally complex draw that reaffirms the definition of forgiveness. Philomena is in no way a bad film, and will assuredly please legions of grandmothers with its welcoming pleasantries, but it fails to truly establish itself. A movie that is certainly not bad but never truly great either, it is destined to be forgotten.