“American Hustle,” the latest from Director David O. Russell, is loosely based on the true story of an FBI sting operation advised by a convicted con artist. With its extremely talented ensemble cast, Russell creates a colorful period piece with great characters and excellent art direction.

Irving Rosenfeld (Christian Bale), is a small-time conman who teams up Sydney Prosser (Amy Adams), grifting money via an investment scheme. Despite his marriage to single mother Rosalyn (Jennifer Lawrence), Irving and Sydney find true love with each other. 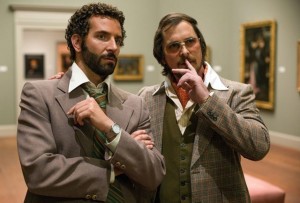 Caught by the FBI, Irving and Sydney are forced to help FBI Agent Richie DiMaso (Bradley Cooper), who’s looking to make a name for himself by bringing down corruption in the New Jersey State Government.  The three start working with Carmine Polito (Jeremy Renner), mayor of Camden, and the plot spins out from there. Things get complicated as Sydney and Rosalyn’s jealousy grows, and relationships between all the characters begin to intertwine.

Russell pulls deeply from Scorsese, with swooping steadicam and dolly shots, long takes, camera whips, and a ton of period music. The period is captured beautifully in the film’s art direction. 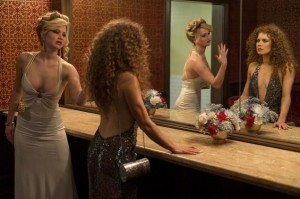 Christian Bale outdoes himself once again with a full physical transformation, gaining what can’t be a healthy amount of weight for the role of Irving – between his giant beer belly and hideous combover, it’s hard to believe he played Bruce Wayne. The rest of the cast is excellent: Amy Adams brings incredible depth to her multi-faceted con artist, deeply in love with Irving as Sydney, as well as carrying on as the character she’s taken in the con. It plays out wonderfully. 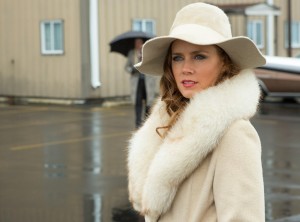 The most negative thing I can say about the film is it plays out a bit predictably. “American Hustle” doesn’t necessarily bring anything new to the genre, however, the performances and production design make for an extremely polished and entertaining film. It’s clear that we’ll be hearing a lot more about this film come awards season.