December is an exciting month for the film enthusiast. Studios jam pack it with their last crop of Oscar hopefuls, leaving film fans to scramble to find time to fit it all in. This December in particular is one for the studied cinephile, with both Scorsese and the Coens coming to bear with their latest. It’s easy to forget just how spoiled we were for four years, being treated to solid and steady output from the brothers Coen, starting with No Country for Old Men and ending with True Grit, only to leave us drooling in anticipation for three years with ever-diminishing patience. Inside Llewyn Davis is exactly the kind of film you would expect from the Coens, complex and often
humorous, with every piece executed brilliantly.

The Coens’ latest finds us in the Greenwich Village folk scene in 1961. Llewyn Davis (Oscar Isaac) is a folk musician that spends his days playing music and finding someone he hasn’t pissed off enough to let him crash on his couch. Following Llewyn through a week in his life, we see the struggles that go with being a musician that hasn’t quite made it. For Llewyn, music is his life, something he can’t get out of, even if he wanted to. 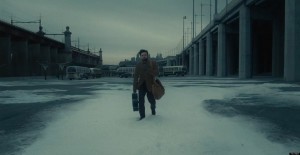 It is so hard to figure out just where to start with the film. Perhaps it is best to begin with what drives our main character so forcefully: the music. The music throughout the film is hypnotically beautiful. The songs weave themselves throughout the tapestry of the film illustrating the development of our Llewyn. Under the watchful eye of T-Bone Burnett, the folk songs are developed
wonderfully and avoid the artificiality that often accompanies the covering of previously released songs. This is not the first time that the Coens have teamed with Burnett, their most notable previous collaboration coming in O Brother, Where Art Thou?, however this time they may have outdone themselves. The world is crafted around the music, and the many performances are organically mesmerizing. The soundtrack fuels the fire of folk revival that Mumford & Sons has so heartily been championing, with a deep authenticity that gets to the very heart of what the music is about. 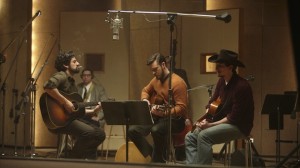 Greenwich Village as seen on the screen is one of perpetual slush. The colors are desaturated enough to lend each and every scene a cloudy gray pallor. The damp and forlorn cities embody our lead character and at times, even he seems to embrace the absolute worst of what is around him. As he trudges through an abandoned parking lot, he cannot walk on the cleared asphalt, opting for the crunchy white outcrops of snow, imbuing the simple action of walking with a sense of independence and his own, in the words of comedian Pete Holmes, “don’t tell me what to do”. The film is populated with exceptionally used actors, from the use of Timberlake’s musical ability to Goodman’s deep gravely tone that lends even his ridiculous pronouncements a sense of authority. Inside Llewyn Davis is ultimately light on plot, but that is far from a weakness, as its writer-directors are perfectly happy with, and eminently talented at delivering, a deeply shaded character piece.

Llewyn is a familiar character for the Coens. The put-upon loner that is laboriously trying to make his way through the world with dubious intents, Llewyn is like a relative of Barton Fink and Larry Gopnick. Llewyn has a mixture of the pretentiously self righteous

Barton and the Job-ian Larry just trying to understand why his life is crumbling, with some other eccentricities thrown in for good measure. The most interesting thing about Llewyn is not his homeless ways, or general level of assholery, but his trouble with emotions. Throughout much of the film, he is bottled up, speaking in short sentences that communicate just enough to be understood. He isn’t the man he shows to the world, living behind a veil of annoyance and failed attempts. It is through his music that he is able to express himself, with two to three minute outlets of the man beneath all of the turmoil. Oscar Isaac captures all of Llewyn as he settles onstage. You see the weight lift, and the truth come pouring out through song, only to come crashing back down as he scuttles off stage. These glimpses into Llewyn’s being elevate him as a character, past his predecessors. Sure, the Coens have dealt with this type of man before, but never have we seen this vulnerability, this unbridled release of emotion. It makes it all the more heartbreaking, for we see a man that is trying, but even on his best of days, no one else sees any real merit to exploring him further. 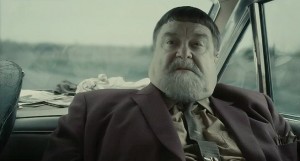 Inside Llewyn Davis is a film catered to the Coen faithful. Its choice to focus more on character, with only a secondary concern for plot, will likely deter many of the less cinephiliac. However, the story they choose to tell, and the character at the film’s center is crafted delicately and beautifully, more than overcoming a more traditional cinematic structure. This is a film about folk music, from tip to tail, and each and every moment is built upon this sonic foundation. Playing like a cinematic vision of its very own folk song, Joel and Ethan Coen build the film with thematic choruses and visual verses. The strength of the film and its ability to frolic between comedy and drama is matched by its characterization of Llewyn. Masterfully brought to life by Oscar Isaac, Llewyn is his own worst enemy, dooming himself to repeat the motions like a depressing Groundhog Day. Even Llewyn is aware of the minimal possibility of achieving actual success in the profession he has been presented, however regardless of any effort he makes to escape; he is doomed to his own Sisyphean act of performance. For it is only through performing that he truly comes alive, and is able to express his whole self. Llewyn bookends the film by saying, “if it was never new, and it never gets old, then it’s a folk song,” and in its own way that is Inside Llewyn Davis; possessing a familiarity while being majestically delivered that allows it to be yearned for through its depression.