Martin Scorsese has made some of the most iconic films of our time: classics inspired by the history of cinema and including superior performances, cinematography, and editing that have in turn inspired countless other filmmakers. “Wolf of Wall Street,” the director’s latest collaboration with regular lead Leonardo DiCaprio, is a stunning combination of all the qualities we’ve come to expect from Scorsese.

The film opens with Jordan Belfort (Leonardo DiCaprio) starting as a new stockbroker at a firm on Wall Street. Taken out to lunch on his first day by boss (Matthew McConaughey in a small but extremely memorable role), Jordan learns that the rule of Wall Street is to take the money from your client’s pocket and put it into your own. Following Black Monday, the largest stock market crash since 1929, Jordan finds himself out of a job. Looking for a new opportunity, he stumbles into the world of penny stocks.

Becoming extremely successful trading penny stocks in a Long Island boiler room, Jordan breaks out on his own. Recruiting his friends, including his newest friend, Donnie (Jonah Hill), Jordan forms Stratton Oakmont, a firm with the facade that will appeal the to richest 1% of the United States and turn their clients’ money into extreme profit by making reckless investments.

The film is filled with references to the late 80s and early 90s: regrettable haircuts, white Ferraris and Lamborghinis, and drugs – lots and lots of drugs. We’ve seen drug use in Scorsese films before, but not to the (probably realistic) excess found here. There is such heavy use of Quaaludes in this film, it might be considered a supporting character.

In a first, Scorsese used neither Robert Richardson or Michael Balhaus as cinematographer on “Wolf,” instead working for the first time with Rodrigo Prieto (nominated for “Brokeback Mountain,” and also DP on films including “Argo,” “Alexander,” and “21 Grams”). The film still looks and feels like a Scorsese film, but not as much as when Richardson is lensing.

The performance DiCaprio gives in “Wolf of Wall Street” is definitely one of his best. In particular, there’s a great scene of physical comedy that shows just how far outside his norm DiCaprio went with this role. Jonah Hill, who was cast to some controversy by hardcore Scorsese fans, excels in his performance. 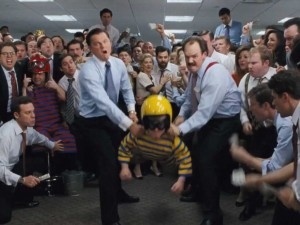 The film is three hours long but I never felt like it dragged. “Wolf of Wall Street” is Scorsese unleashed, filled to the brim with sex and drugs. Scorsese and his team have put together an entertaining and funny film that on one level feels different then most of his films, but, at its core is definitely a Scorsese movie.

One thought on “Film Review: The Wolf of Wall Street”