Darren Aronofsky is a fascinating filmmaker. His films tend to be strong character pieces, and stories told with strong, sometimes disturbing, imagery. I remember being blown away the first time I saw his first feature, “Pi,” and have been fascinated by the choices he’s made since. When news broke about his new film “Noah,” some were ready to dismiss it, Aronofosky cashing in for the big money religious films tend to bring in. But I knew that he’d be bringing something different to the screen; Noah wasn’t going to be a Sunday school retelling of the biblical tale.

Starring Russell Crowe as Noah, Jennifer Connolly, Ray Winstone, and Emma Stone, “Noah,” is Aronofsky’s first true big budget picture (The Fountain being his previous most expensive at $35 million, everything else was under $10 million). As a child, Noah watches his father cut down by the villainous Tubal-Cain (the older version eventually being played by Ray Winstone), as an effort to cut down on lineage not from Adam and Eve’s son Cain. Noah survives, and many years later, is living a simple life with his family. Noah witnesses a miracle, a drop of water from the sky sprouts a flower. He later has a disturbing dream, which he interprets as a message from the Creator, that death is coming, and that they need to visit with Noah’s Grandfather, Methuselah (Anthony Hopkins), who can shed more light on Noah’s vision.

Following the visit with Methuselah, Noah has his instructions, construct an Ark, and save the animals that inhabit the world. Of course, the plot thickens, as Tubal-Cain arrives, and tells Noah if there really is a flood, he’ll be on the ship he has built. 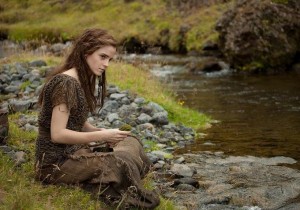 What is great about “Noah,” is that the film is not heavy handed with religious agenda. The word “God” is not mentioned a single time. Noah’s instructions come from the Creator of all things. Aronofsky uses the film to seal with questions of human purpose and morality. The film paints a complex picture of Noah as a complicated, sometimes dark character. The world in which he inhabits is at times horrifying, and the decisions and challenges the character is faced with are almost insurmountable. 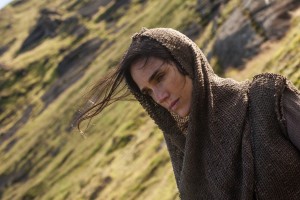 Russell Crowe is perfect for the role, as is Ray Winstone. Jennifer Connolly who last paired up with Russell Crowe in A Beautiful Mind is excellent is Naameh, Noah’s wife. Her character is a strong voice to Noah, which leads to some great scenes between the two in the third act.

Its great to see an imaginative filmmaker like Aronofsky with some room to play. While there’s some imagery and CG that might not look as good as other big budget films, it still works. “Noah,” is a great film, and those skeptical of it’s messaging will be surprised with the direction it goes in toward the end.