Chances are, at one point or another you’ve seen or heard of war reenactors. Growing up in Massachusetts, on more than one occasion we went up to Lexington on Patriots Day to see the Revolutionary War unfold before us. Before “In Country,” I had no idea that anyone reenacted the Vietnam War, which is what peaked my interest for this film. The documentary, directed by Mike Attie and Meghan O’Hara, follows the 2/5 1st Cavalary, a platoon of Vietnam War reenactors in Oregon. 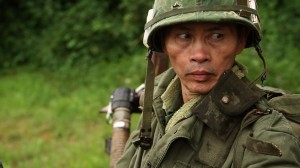 alongside American troops in Vietnam. Also part of the platoon is a High School student who has already enlisted, and a local micro-brewer, whose looking to experience something close to war, without actually enlisting.

The film beautifully intertwines period archival footage, as well as personal footage from a few of the subjects and their tours in Iraq and Afghanistan, to tell a story about war, but in a completely unique way. The music supervision is excellent, the team pulls period songs, as well as songs from the era to complete the experience. 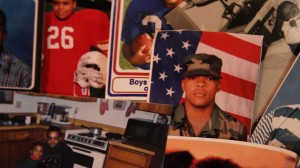 Though a documentary, the films narrative moves along the platoons activities during the reenactment. Quite remarkably there were times during the film where the documentary fades away in the background, and for almost a moment, you believe these folks are actually at war.

“In Country” touches upon many aspects and perspectives on war, especially in the intimate moments you share with Nuegen. The film deals a lot with PTSD, as well as the 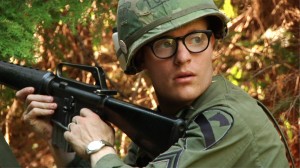 camaraderie found among these veterans. The film perhaps suggests that the entire act of recreating some of those experiences in Vietnam is a way these folks can go “home,” but without the possibility of never coming back. “In Country,” is a compelling look at Veterans in a way we haven’t seen before; It’s a well constructed documentary, and I hope to see it do well in distribution.