I’m fascinated by risks in broadcast television. Probably because it isn’t something you see too often. Television is an expensive medium and despite investments; It’s completely supported by advertisers, and it is hard to justify any risk taking without the fear of losing your investors. In “Life on the V: The Story of V66,” the risks paid off, but, the idea itself was unfortunately not sustainable for too long.

“Life on the V: The Story of V66,” from director Eric Green, provides the history of the 24-hour local broadcast music video station, as told by its founders and “VeeJays.” Combining archival footage from the channel and the period, as well as additional interviews with iconic Boston musicians, we learn of the relevance, and the fond memories V66 left for so many people. 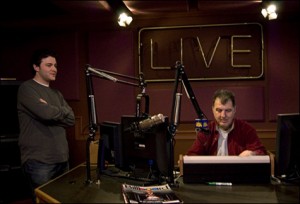 Despite MTV’s premiere in 1981, Cable had not penetrated the local market, so there was a demand for this type of programming. Founded by John Garabedian and local radio legend Arnie Ginsburg, V66 launched in the Boston market February 12, 1985. The channel showcased many local acts, as well as brought in music videos that you’d otherwise need Cable to see. As the year went on, the channel struggled to maintain ratings that satisfied advertisers. In the film, Garabedian candidly speaks about the decision to sell the channel to the Home Shopping Network, bringing a swift end to a revolution looked back at fondly.

“Life on the V,” has a strong nostalgia factor going for it, especially

for folks that grew up in or around New England. There are definitely parts in the film that have some universal appeal, but because much of the film focuses on the local market, there are some aspects that might go over the heads of an audience outside of New England. Outside of that, the interviews and detail found here are great, and anyone who has any interest in Broadcast, or the 80s Boston music scene will love this documentary.