It’s more than volleyball. 9-Man is an intense sport, utilizing some of the rules of volleyball, its a street sport that started in China, and became popular in immigrant Chinese communities in the United States. This new documentary from first-time director Ursula Liang, follows 4 teams in the North American Chinese Invitational Tournament. The Boston Knights, the Boston Freemasons, Washington D.C. CYC, and the Toronto Connex.

Played every Labor Day weekend, teams practice starting in the Spring, with mini-tournaments occurring in the mid-Summer. The sport’s rules are fascinating. Men only, 6 of the 9 players must be of 100% Chinese descent, and the other 3 of Asian descent. There are many humorous moments in the film, with many of the players and coaches being quite passionate for the competition. One of the most interesting things about the rules, trash talk is completely allowed. 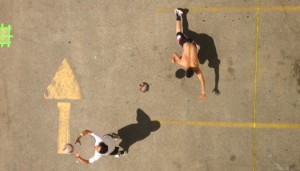 Liang uses the timeline of the summer to explore the details and culture of the sport, and takes a fly on the wall view for much of it. The league maintains the importance of keeping the sport as Chinese as possible, as it avoids spoiling the cultural significance of it. She goes into this controversy by interviewing players of non-Chinese descent who play pick-up games of it during practice.

The teams train intensely, looking to do battle with the reigning champs; San Francisco based team Westcoast – who recruits 6’7″ Olympian Kevin Wong for their team.

As far as technical aspects go, 9-Man was curiously shot in 4:3 – outside of that sound and picture are relatively good, with a few hiccups in spots – but not at any detriment to the film as a whole. Liang and her editor put together an entertaining and interesting sports film. Regardless of your interest in sports, “9-Man” is fun to watch, and does a great job of giving you a sense of the competition, camaraderie, and rivalry.