The allure of celebrity is the unknown. We imagine their lives to be filled with so much more than our own, luxurious extras and experiences that can only be had by the select. Our curiosity captivates us, and leaves us yearning to know more, itching for a chance to be a part of that world. It is the same curiosity that inspires people to travel, to go on safari, to go skydiving. For many of us, it remains just on the horizon, perpetually out of reach through both societal limitations and strictures we place on ourselves. George Plimpton appeared to be a man without these boundaries, able to go out and experience the things that we only hoped to. In Plimpton! Starring George Plimpton as Himself we are not only reminded of this man of perpetual experience, but also explore what being the world’s everyman can do to one’s life. 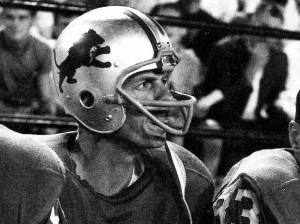 George Plimpton began his life in privilege. Born into wealth with multiple siblings, the Plimpton name carried with it a strong lineage of great successes. Perhaps in response to this expectation, George forged his own path. Far more interested in experience and writing, he broke the Plimpton tradition and was kicked out of celebrated Phillips Exeter Academy. After completing his education at Harvard, he moved to Europe and co-founded The Paris Review. As the publication’s editor, he did little writing until he started his Art of Fiction interview series. Expanding on this exploration of experience through those that know it best, he took a job at Sports Illustrated and proposed the concept of participatory journalism. His first piece was a hit, and this style became Plimpton’s hook, leading him through a life of experiences that most only dream about.

The spectacle of Plimpton’s life is enough to captivate. He played in all of the biggest professional sports, was part of the circus, went on safari, and basically fulfilled what would make up most of our bucket lists. On top of that he rolled in circles with upper echelon politicians, renowned authors, and looked at home around celebrities. He built a career on being the world’s everyman while living a life that was nowhere near that label. To find excitement in the stories of Plimpton is like finding sand in the desert. However, filmmakers Tom Bean and Luke Poling are not content to simply recount the amazing, and in so doing reveal their strengths as documentarians. 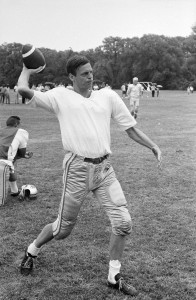 As the film delves deeper into the life of George Plimpton, the pageantry fades into the background as the man himself becomes the focus. Throughout his career, Plimpton was the audience’s surrogate, trying and failing at the most desired of professions. He proved to the people just why there were professionals and acted as a representation of the separation between us and them. Through this faceless mutability none of us truly knew who Plimpton was as a person. The film posits that this may have been by George Plimpton’s very design. As many of those closest to him recount stories it becomes evident that Plimpton remained forever the enigma. Keeping most at an arm’s length, at a minimum, he was the world’s storyteller just not so focused on the story of himself. He was defined by his stories, by his actions in participation, while the man remained an unknown. His inescapable charm and ability to disarm in his chameleonic ways immediately endears him to the viewer and draws you deeper, hoping to truly know the man. Nevertheless, like even those that loved him most, we remain on the outside, left wondering just who Plimpton was outside of his stories. 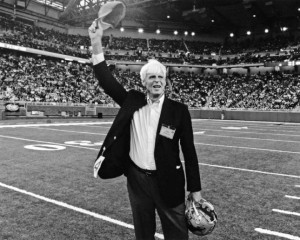 Edited with a confident finesse, the film weaves archival footage and interviews seamlessly. I found myself forgetting that Plimpton himself was not simply telling me his story. Having surrounded himself with eager ears, those that remember him convey his stories as if they were their own. Although it possesses all of the trademarks of traditional documentary and doesn’t play in the crowded fields of reenactments, the film often feels nearly narrative in structure. This impressive storytelling ability, a skill that is so achingly false when merely attempted, make Bean and Polling ideally suited to covering Plimpton’s life. Documentaries can often carry the stigma of staid and cold removal, but Bean and Polling present it all so warmly with a respectable reverence that announces them as not only documentarians, but all around filmmakers to watch.

Even as Plimpton’s life comes to an end, the viewer is left yearning for more. It isn’t a yearning for George Plimpton the entertainer or showman, but rather George Plimpton the person. Like the many that speak so lovingly about their time with him, we desire a closeness with George that can never be satisfied. There is so much more to know, as hints to his complexity flit by gracefully. He wasn’t a perfect man, and the film is smart to reveal this, but he was an endlessly interesting one. The most interesting moments are those in which we are offered glimpses behind the curtain. Hearing his list of the tasks left unaccomplished, it is as if we are speaking to Plimpton directly at one of his many cocktail parties. In Plimpton! Starring George Plimpton as Himself, documentarians Tom Bean and Luke Poling do not simply retell the many spectacles of Plimpton’s life, but plumb the depths of who he was as a person. As if playfully stoking a campfire, they invigorate the audience’s curiosity for more, while never fully quenching it. Perhaps that is how George would have liked it, further inspiring a legion of listeners to go searching and to actually become the participant.