Chef expands to theaters in Boston today, May 16. Check your local listings for showtimes.

Our obsession with celebrity isn’t as fresh as the media often portrays it to be. We have been vociferously consuming the strangers that grace our screens for ages. We raise them on pedestals and they lived in a realm so distant from our own. The internet has only fed this hungry machine, with multiple avenues of social media and a forever active blogosphere that has essentially reduced the separation between celebrities and us normies. Twitter specifically has provided an outlet in which the masses can directly interact with those vaulted beauties, and in many ways has reduced their luster. This access also creates an avenue for the very creation of celebrity and a multitude of short burst flavors of the week. Chef touches on this ability of the internet to create and destroy, while also delivering a pleasant film caked in delicious window dressing. 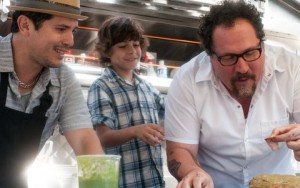 Chef Carl Casper (Jon Favreau) was celebrated as a chef to watch, with tremendous skills only matched by his creativity. Then he moved to Los Angeles and began to settle. Now the head chef of a successful restaurant, he is not hurting for clientele but there is certainly something missing. Every attempt to introduce a new element onto the menu is met with the wall that is Riva (Dustin Hoffman), the restaurant’s occasionally intrusive owner. When a lukewarm review of Casper’s food goes viral, Casper’s frustration turns to anger. In the same night that he walks out of the kitchen, he verbally accosts the critic that started it all, and quickly experiences the full wrath of the internet. Jobless and the butt of jokes across the web, Casper is forced to take a hard look at his career, and return to the basics of why he loves cooking so much.

It’s been a bit since we talked about Jon Favreau the director with any kind of reverence. This latter half of his career saw him basically start the Marvel machine with Iron Man, only to quickly prove how well it could fail with Iron Man 2, and plumbed the depths of our disappointment with Cowboys & Aliens. He has shown that he is certainly capable of working with a large budget, although absolutely not excelling. The Favreau that we love is one that works on the smaller scale and crafts relationships within his characters. His eye for relationships first showed up in Swingers (admittedly he only wrote that one), and to a lesser extent his later retread in Made. Elf runs on constant repeat through most households from November to December every year because of the strength of its characters’ connections, and even Iron Man was best when it was just dealing with the people. There are certainly parallels to Chef Casper’s career and Favreau’s. Both were heralded, yet have drifted from what exactly it was that garnered them so much attention. It feels appropriate that in Chef, Favreau hangs up his special effects hat and returns to a focus on relationship; and in so doing reminds us just why we liked him so much in the first place.

The film struggles to come across as one cohesive piece. It is overcrowded with side plots and quickly hops between thematic threads with little care for transition; going from fall from grace, to lackluster parenting, until landing on road trip, with romance sprinkled haphazardly. The switches are dramatic and jarring, but the space in between these tonal shifts are filled with enough delightful filling to make it nearly forgivable. Favreau writes his characters thoughtfully, allowing them to possess deeper shading regardless of their limited screen time. Although, that may be a function of the actors involved because no matter how small the role (and honestly, the film is overpopulated with minor characters), Favreau is able to land A-list talent. An excitement, that is assumed to emanate from Favreau, pervades the entirety of the film, being seen in all of the performances, and elevates even the most mundane to higher levels of enjoyment.

Percy, played wonderfully by Emjay Anthony, does not indulge in the simplifications of most theatrical children. Anthony delivers a thoughtful, nuanced, and above all else, honest performance that makes the relationship between Percy and his father satisfyingly authentic. John Leguizamo fills the comedic sidekick role and plays it just this side of bombast, never coming across nearly as annoying as he should be, and even Sofia Vergara pops up to show that she has abilities outside of the requisite fiery Latina role. Acting as another character entirely is the food. Favreau trained under food truck chef Roy Choi in order to be able to believably portray the chef onscreen, and shoots the film with as much admiration as his character could want. The images light upon the screen as celebrations of food, and will cause you to unconsciously moan at the mere thought of tasting them. For a film with both Sofia Vergara and Scarlett Johansson, it is saying something that you will spend more time drooling over the barrage of food porn.

A mess of convolution, the occasionally ineptly saccharine, overflowing with unnecessary tertiary characters, and host to an ending that at best feels tacked on, there is a lot Chef could have done better. That being said, it also has so many moments of pure delight, flitting between comedy and heart-wrenching emotionality with a respectable grace. It also manages to shoehorn in a message on the strength of social networking that acts nearly as an advertisement for Twitter. That is perhaps Chef’s biggest problem, the hope of tackling just so many different subject matters within the span of one feature. When Chef chooses to focus on one area, be it the father-son relationship, or the wonder of food, it proves the strength of its writer-director. Through all of its faults, Chef is an enjoyable time at the cinema that will definitely leave you satisfied if not in awe.