“Godzilla,” arguably the first movie of what’s looking like an overall questionable summer movie season, was my first anticipated movie for the summer. Ever since the buzz started with its 2012 Comic-Con reveal and the excellent, epic-looking trailers, I was psyched for this release. So, onto my completely spoiler free review.

From director Gareth Edwards, known for his film debut, “Monsters,” made with a crew of just 5 people, I was definitely curious about what he could bring to a franchise that hadn’t seen an American entry since Roland Emmerich’s abysmal 1998 film. Taking the stance of a reboot, we start the story as two scientists (Ken Wantanabe and Sally Hawkins) enter a quarry in the Philippines, where they discover a giant fossilized skeleton, and an unidentifiable “pod.” 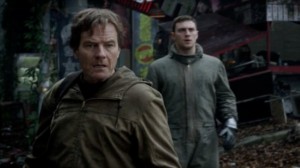 The story movies to outside Tokyo, where we meet Joe (Bryan Cranston), who’s concerned about recent seismic activity around the nuclear power plant he manages. He sends his wife (Juliette Binoche) to investigate the reactors; as they make the inspection, an earthquake and an explosion occur at the nuclear facility, resulting in a quarantine of the city around the plant.

Fifteen years later, we meet back up with Joe’s son Ford (Aaron Taylor-Johnson), an explosive ordnance disposal officer in the Navy. Having

just completed a 14-month tour, he returns to his wife (Elizabeth Olson) and son in San Francisco. Before he can settle back in, he gets word that his father has been arrested in Japan for trespassing into the Quarantine zone. Ford flies out to meet Joe, who has become obsessed over the seismic activity that occurred 15 years ago and uncovering the truth he’s convinced the Japanese Government is covering up.

The film does a great job in its first act, building up the suspense and mystery around the monsters. However, when we’re thrust into the bulk of the story through Ford’s eyes, we lose some of the connection that we had with Joe: because we spend so much of the introduction with Joe, and the amazing Bryan Cranston, Ford’s character feels fairly flat. Ford feels quite two-dimensional, and while his primary goal of getting back to his own family is important, his motivations weren’t built up as well as Joe’s.

For example, Ford saves a young boy who he was trying to get back to his parents during a scene of monster action. When the two part ways again, the boy just wanders off, no thank you, no acknowledgment of the fact that they both somehow survived a monster attack, due mainly to Ford’s heroism. 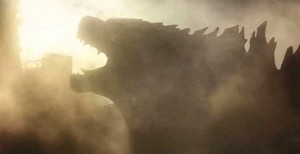 For a Godzilla movie, the film doesn’t have much of its titular character in it; a Godzilla movie without Godzilla should focus on a human story, right? Too bad we didn’t get enough of that either. Ford’s storyline often felt like a weak frame only there to justify the camera perspective.

Careless character developments aside, the film is filled with excellent imagery, especially the halo jump sequence that was featured in the trailer and posters for the film. Its music haunting, and the roar of the king of monsters shakes you to the bone. Unfortunately, not enough to save the whole picture.

“Godzilla” mostly felt like a movie trying to find its feet, and I hope they set a higher standard for characterization in the guaranteed sequel, or at least keep the focus on the action when the monsters finally duke it out.