Note: This film was reviewed in 2013 at its premiere at IFFBoston.

I’m not a fan of found footage movies. In fact, since “The Blair Witch Project,” the only other found footage film I’ve enjoyed was “Cloverfield.” Then along came “Willow Creek,” Bobcat Goldthwait’s latest film, which is certainly a successful departure from his past work.

Jim (Bryce Johnson) and his girlfriend Kelly (Alexie Gilmore) are headed out to Willow Creek, California, to retrace the steps of Patterson and Gimlin, the duo behind the famous footage of Bigfoot walking through a creek. Jim is documenting the journey in hopes that they’ll be able to collect their own footage of the famously elusive biped; Kelly is a complete skeptic, but she’s there to support her boyfriend.

The town of Willow Creek is the mecca of Bigfoot culture, and the couple stops along the various tourist attractions for some hilarious scenes along the way. Bigfoot burgers, kitschy souvenir shops, and museums usher along the trail that will lead them to creek where Patterson and Gimlin saw Bigfoot. 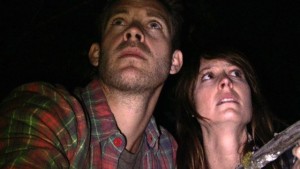 The film is shot entirely on consumer-grade electronics, handheld by Jim and Kelly – it’s rough around the edges, but that’s the point. There aren’t as many dizzyingly shaky scenes as there were in “Blair Witch,” and when things are disappointingly shaky, it fits the context of that scene.

Bobcat’s direction of Johnson and Gilmore’s performance is great – the characterizations feel like real people. The actors have the chemistry of a real couple, and a few personal (and at one point, awkward) moments are “caught” on camera, further adding to the “legitimacy” of the found footage.

“Willow Creek” starts as a funny road trip movie but things get a bit darker later in the film. It’s great to see Goldthwait trying stuff outside of his norm – during the Q&A that followed the world premiere of “Willow Creek” at IFFBoston, Goldthwait mentioned that his films feature over 1200-1500 edits on average, but this film featured only about 97. The film was shot over a short period in what sounds like a run-and-gun production, but the takes he chose for the finished product don’t feel like hurried decisions. The film has the spontaneous feel of a found footage film but comes together naturally.

Bobcat Goldthwait once again shows his ability to tell a great story and keep an audience entertained from start to finish. Check out “Willow Creek” as it makes its rounds – or watch it on-demand on iTunes!

Watch the great Q&A that followed the world premiere, here.