The Internet’s Own Boy: The Story of Aaron Swartz opens in limited release on Friday, June 27. Check your local listings for showtimes.

I use the internet every day for most of the hours that I am awake. If you were to take the internet away from me tomorrow, I would be lost and just a bit scared. I am of a generation that has had internet available for most of its life. Sure, I remember the endless AOL CDs, the agonizing screech of a dial-up connection, and the frustration of a phone pick up disconnection; but it has almost always been there. I never had to deal with encyclopedias and microfiche is a completely alien concept. Here is this tool that I use from the moment I wake up until I start to dream, and I know so little about it. The Internet’s Own Boy: The Story of Aaron Swartz shows just why those like me need to take an active role in that relationship.

Aaron Swartz possessed the kind of intellect that is destined to put people off. He took to knowledge like a fish in 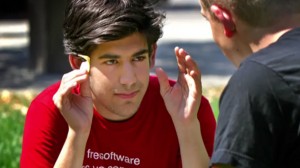 water, learning to read well before most children and happily exercising that ability. Early on he discovered the wonder of the computer, developing coding abilities while most kids are figuring out how to write their names. His appetite for knowledge saw the internet as a new landscape aching to be forged. Reddit exists because of him and the basic news collection that is RSS would not be what it is without Swartz. But Swartz was not one to be instructed, quickly tiring of both school and the cubicle life. In his pursuit of knowledge he became embroiled in the emerging realm of technological liberty. A life of coding turned to one of politics, social justice, and a thirst for information access. 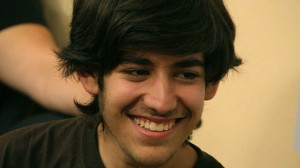 The internet has been this thing that we all use, yet don’t really express large feelings about. However, as our lives become more entrenched in web activity, we are forced to care more about just how it is used. It is because of services like Netflix and the rise of video streaming that the phrase “net neutrality” isn’t just known by the tech-obsessed. Rebuffering. Cannot Connect to Netflix. Netflix is Unavailable. These are words that we dread, and are just now beginning to understand as political and business issues rather than just a matter of service. Aaron was ahead of his time, recognizing just how important the individual and their freedom was to the strength of the internet. He won his fight against SOPA and PIPA and I wholeheartedly believe that if he were around now, he would be organizing for net neutrality.

But The Internet’s Own Boy is not merely a political film, or one profiling a prolific thinker. It is a personal film. One that alerts the viewer to be aware, not only for the continuing use of the internet they have come to love, but for their own civil liberties. Aaron is far from flawless, and his many eccentricities and ineptitude further humanize him. Director Brian Knappenberger balances all that the film hopes to be without losing sight of its focus. As the title suggests, this is ultimately about who Aaron was and what he inspired in his lifetime. Knappenberger communicates the hope and frustration so fully that it becomes our own. You struggle to understand how this is the world that we live in. You yearn to join Aaron in his fight, at his side urging him to push forward. It makes his loss all the more the heartbreaking, accomplishing a moment of emotional honesty that hasn’t been accomplished since Dear Zachary. 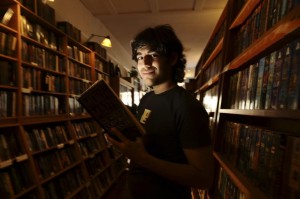 Knappenberger knits the film together through a series of archival footage and requisite talking heads. The documentary staple of filmed interviews runs the risk of coming off as staid and overcrowded, yet here it feels necessary. We do not have Aaron to tell his side, but instead we have all of those that knew him to paint the picture. The film is edited skillfully, producing a cohesive whole that is able to be quietly dour, yet filled with palpable tension that rivals the best political thrillers. Most impressive is just how much information Knappenberger is able to cram into what is ultimately an extremely tight documentary. It is beautifully paced, making even the history of the internet seem remarkably exciting, and keeps the viewer entranced throughout its entirety.

When it comes to technological innovation, everyone knows the names of the pioneers of the tangible. Steve Jobs, Bill Gates, and even Jeff Bezos are familiar to those with even a minimal knowledge of technology; however, the pioneers of our beloved internet are more elusive. The Internet’s Own Boy is not content to just make you aware of Aaron Swartz, it wants you to know him. The film manages to be so many things, profile of a thinker/revolutionary, call to action, historical account, commentary on our digital climate, and it is all of them astoundingly well. It balances and communicates its story in a manner that is subtle and organic, and never heavy handed. The Internet’s Own Boy: The Story of Aaron Swartz does not merely inspire you to take part in the fight for your digital future, but to think and question what is posited as fact. It urges you to learn about the world that surrounds us, which is what Aaron would have wanted most of all.