There was a time when cinephiles could actually get excited for the latest Luc Besson film. No, no, not one of the many films the guy is credited for writing, or the even more he produces. I am talking about those films where Besson’s name followed that hallowed “directed by” credit. That snapshot of time in the early 90s when he crafted action with brains. Unfortunately, the days of Nikita, Léon, and The Fifth Element are firmly behind us, and Besson seems far less interested in communicating anything fresh or even entertainingly coherent. At least that’s what he seems to be saying with Lucy.

Lucy (Scarlett Johansson) is having the time of her life in Taiwan. While trying to head home to sleep off a lengthy night of drinking, dancing, and, more than likely, some drug use, her man of the moment implores her to handle a delivery for him. Despite extreme pushback, Lucy ends up handcuffed to a mysterious case and roped into a seedy deal. Things go from bad to worse as the terrifying drug kingpin, Kang (Choi Min-sik), turns her into a mule for his latest drug. When the bag ruptures inside her abdomen, her body becomes flooded with the mind altering agent, allowing her to access parts of her brain like never before.

The easy thing to do here is to decry the film’s very premise for being based in fallacy. It is a myth that humans use only 10% of their brains. But that’s all I’m going to say on the matter, as plenty of films put forth ideas that have little more than an anecdotal root in fact. A good film can overcome the numbskull thinking of its premise, allowing the viewer to place the stupidity in the backseat and enjoy the ride. Lucy is not a good film.

The first offense comes with its script. Assembled from clichés and stereotypes, it doesn’t have the good grace to even fully develop its lead character. Johansson has proven herself as a more than capable actress and action heroine. It was just a few months ago that she elevated Black Widow in Captain America: The Winter Soldier from background add-on to fully developed player. She showed a strong woman that had just as much complex personality as physical prowess. Lucy is a step backward for the actress. She begins as merely a sketch, an entitled, beautiful, party girl with little to offer. When she is exposed to the drug, she goes tumbling into the robotic. Any modicum of personality that the character once possessed is completely abandoned, for now she is able to see so much more of the world, and her only response is to be endlessly cold. It is an inauthentic choice that paints Lucy as a fractured character, incomplete both pre- and post-transformation. 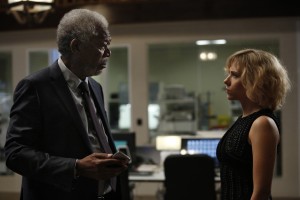 The film is absolutely obsessed with these concepts of intelligence and the stupidity of society. However, it isn’t able to communicate this idea in an accessible manner. The majority of the dialogue, be it from the eponymous Lucy, a crudely drawn gangster, or Morgan Freeman in a token Freeman role, ends up sounding like the incoherent ramblings of an entitled madman. It is like being forced to listen to the drivel spewed by an over-caffeinated, freegan barista at the ultra-hip, fair trade, organic coffee shop on just how broken the world really is; while prices remain high enough to render the anti-capitalist tone hypocritical. The actors struggle with the script just as much as the audience; often delivering lines with what can only be described as confused, while I assume they attempt to figure out just whom from their team they need to fire.

You’d think that the involvement of Besson would at least assure worthwhile action. Again, you are left wanting. At best, the action is middling, with an overreliance on Lucy’s new powers that don’t make for anything truly interesting. It amounts to little more than lackadaisical gunplay and an underwhelming car chase. Amongst the laughable ruminations on the brain are a scattering of utterly useless and unnecessary inserts. The National Geographic rejects trot across the screen shouting, “Look! I’m a predator! Just like the bad guy! It’s a metaphor!” The choice is distracting and borderline offensive to the intelligence of the audience. Lucy is a film that claims to be about the capacity of the human brain, while displaying the completely idiotic and boring. It is undeserving of any bit of your grey matter. If you need me, I’ll be marathonning Cosmos in hopes that it will be enough to purge this dreck from my own cognitive capacity.