Guardians of the Galaxy opens in theaters nationwide today, August 1. Check your local listings for showtimes.

As soon as Iron Man was getting us excited about the prospect of what comic book movies could be, our hopes were somewhat dashed with Iron Man 2. It wasn’t really until The Avengers that we saw just how great this Marvel Cinematic Universe had the potential to be. Unfortunately, the path post-Avengers has been about as up and down as Marvel’s Agents of S.H.I.E.L.D. Iron Man 3 fell right between its first two installments in terms of quality, and Thor: The Dark World was just a bit worse than its mediocre first piece. Captain America: The Winter Soldier infused the MCU with some freshness and also happened to be the best political thriller so far this year. Would Guardians of the Galaxy, an obscure title to those not entrenched in Marvel comics, be just another time waster in our waiting for The Avengers: Age of Ultron? Turns out, it is so much more. 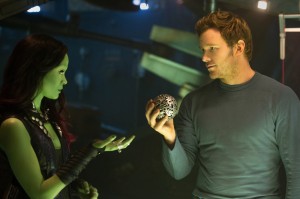 Let’s not harp too long on Guardians’ connections to the MCU. Yes, they take place in the same realm, but in altogether different places. There is a connection in the ultimate villain of Thanos, which has so far been limited to a smirking appearance during the credits of The Avengers. However, as things stand now, that is the only connection. The Marvel devotees will certainly have plenty to ogle over as writer-director James Gunn isn’t above playing host to fanboy deep cuts, but for most of the audience, don’t bother getting caught up in all of the MCU complexities. The link is tenuous at best, and most of the time only serves to drag the film to a screeching halt. It is reminiscent of the many things that hindered Jed Bartlet’s West Wing presidency. At the end of the day, you need to just let Bartlet be Bartlet. The same goes for Guardians.

I had been somewhat underwhelmed by James Gunn’s work up to this point. Slither was a nice bit of fun, but I am far from a B-horror fan. Super was aggressively cynical to the point of negating the humor. PG Porn, a web series he created, was the brightest spot of his otherwise forgettable, although original, output. But what Gunn has delivered here is nothing short of blockbuster excellence. The action is not all explosions and bluster, but manages to use the massive set pieces to move the story forward. These large productions have a meaning outside of simply delighting your eyes and pushing the limits of your ear drums. Of course, it’s really fun to watch as well.

Like Whedon before him, Gunn is sure to take on writing duties along with the directing. In the script, he and partner Nicole Perlman bring an embrace of the 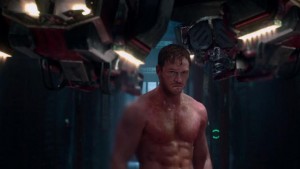 ridiculous with just enough skill and pathos to elevate past meaningless fluff. The majority of the characters are written with the familiarity of a much smaller budget and more intimate film. Peter Quill isn’t defined by his brooding loss, Gamora has complexity that is shaded in subtly, Drax shows true development over the film’s run time, and the tag team of Groot and Rocket are all hubris shell with squishy emotions inside. The film has been advertised to show this as Quill’s film to command, but Gunn keeps in mind its actual title.

Like its Marvel brethren, Guardians boasts exceptional casting across the board. Chris Pratt is showing himself to be the leading man and action star that we ultimately want. He is the fat kid that grew into himself, without losing any of the essential personality. When Zoe Saldana isn’t required to fill the token romantic role, and unfortunately the film indulges in this far too often, she commands the screen. Dave Bautista had thus far been nothing more than a mediocre former professional wrestler with dreams that outsized his abilities. Apparently he was merely waiting for this role to come around. Gone is his typically stilted delivery, and his physicality moves aside to allow him to actually develop a character. I’m not sure who to thank for Groot, be it Vin Diesel or the animators, either way they nailed the gentle giant. Nevertheless, this all pales in comparison to Rocket. Like some hairer and angrier Han Solo, Bradley 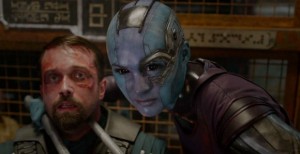 Cooper’s voice work and the flawless animation have turned this rodent into a character that you yearn to have in every scene.

Unfortunately, the film struggles to produce a coherent and worthwhile villain. This has been a persistent battle for the MCU, as outside of Loki they’ve had a tough time producing a bad guy that any of us actually cares about. Lee Pace’s Ronan is fine, it’s just that the care with which Gunn developed his protagonists is absent here. This alien Hitler is nothing but hate, and the blind villainy makes us apathetic to his very existence. It is a moderately sized misstep in what is one of the most entertaining films of 2014. Guardians of the Galaxy should not work as a film, but superb casting and James Gunn’s confident guidance have produced an engrossing, action-packed, and funny film that harkens back to true blockbusters of time gone by. It is a movie to be seen with a large group, be it family, friends, or strangers; there is something here for everybody.

One thought on “Film Review: Guardians of the Galaxy”