No, the pictures are not a joke. The Frank of the film’s title is in fact a man who spends his life wearing a large fiberglass head. In its very concept, it is as if the film is proudly waving its freak flag. Alerting all those that this is just a bit weird and certainly of the indie persuasion. However, the head is little more than a MacGuffin that threatens to alienate its potential audience. Hiding within that oversized cranium is an intimate film that thematically bounces from ideas of acceptance, dreams, and a bit of mental illness, before resting firmly on the notion of finding your place. Frank is far from perfect but just charming enough to be worth the time it requires.

Jon Burroughs (Domhnall Gleeson) is an aspiring musician. He trudges through his office life, his brain constantly grasping for the next great song. Unfortunately, with little inspiration and no band seeking his keyboarding skills, his audience remains the few pillows gathered on his childhood bed. While floating through his daily walk home, he happens upon a man seemingly at the end of his rope. The man sprints into the ocean, tearing off his clothing with suicidal intentions. As Jon watches, he strikes up a conversation with an onlooker. Jon soon finds that the suicidal man is the band Soronprfbs’ keyboard player, and his breakdown will leave them with a hole to fill. Asked to play at their next gig, Jon soon finds that the band may be a bit more than he bargained for, especially its charismatic, and fiberglass head donning leader, Frank (Michael Fassbender).

The face is one of the actor’s most important tools. Sure you could pepper the audience with grandiose monologues or lengthy diatribes, but what allows them to connect with what his happening is the actor himself. We attempt to discern just how a person is feeling by assessing what he cannot help but display on his face. If you take that away, you are seemingly left with only words. Michael Fassbender would beg to differ. Frank is an acting master class as instructed by Mr. Fassbender.

Before we even meet Frank we are told of his genius, his ability to reach into the far corners of the creative and produce the amazing and wonderful. As we first see him, he lightly walks to the center of the stage, presenting his enormous noggin as if it is no different than our own. He stands there, still, waiting for the moment to come alive. Once he is plugged into his amplifier he jolts into existence, becoming all that he could have possibly been described. Fassbender immediately communicates the charm and confidence with which Frank lives. We don’t need to see his face, in fact, we are unsure if we even deserve to do so. We yearn to follow Frank, to listen to his teachings, and like many of the other characters, become him. It is hard to identify just what Fassbender does to accomplish such a brilliantly odd performance. We see a man with a large faux head, but inside Frank only sees his full and true self. 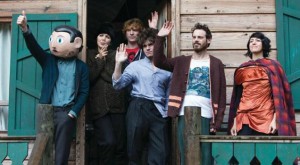 Unfortunately, the rest of the film isn’t quite up to the caliber of Fassbender. The other bandmates are alienating and strange in a way that is off putting. They reject Gleeson’s Jon, as they well should, but do so in a way that is dismissive of the different. This group of individuals who serve to represent an embrace of the strange, and a devotion to honesty, refuse to allow for anything other than their own oddity. Maggie Gyllenhaal’s Clara comes off as angry for the sake of being angry and we never even get a hint of deeper character exploration. The story trots along, almost as if an afterthought of writers Jon Ronson and Peter Straughan. Even they remain infatuated with Frank to the point that they have forgotten to put together a worthwhile piece of cinema.

Perhaps Frank, like its titular character, is just attempting to accomplish more than it is capable. Gleeson is to act as the audience’s surrogate, but in actuality serves a deeper purpose of representation of the establishment. As Jon pushes against Soronprfbs and attempts to make Frank more mainstream, the comparisons to the greater recording industry and the death of the 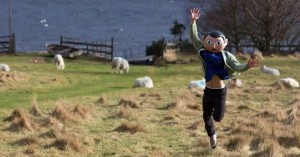 oddly creative is more ham-fisted than the word properly communicates. All of the music elements are off key and a distraction from the greater story. Within this shell of mediocrity, lives an interesting and somewhat fulfilling heart. Observing Frank, as his struggles bubble to the surface, acts as a journey into acceptance, and whether acceptance of self or society is of the most importance. When Frank is good, it is really good, riding on the broad shoulders of Michael Fassbender, but its many lows make long stretches meandering and pedantic. It is a frustratingly slowly paced film populated by a field of people you want to be a rid of, featuring a bravado Fassbender performance revealing how far his skills reach.