Skip to content
home Movies, Reviews Film Review: The Man on Her Mind

The Man on Her Mind is in theaters now. Check your local listings for showtimes.

Think back to the last conversation you had with a close friend. How many times did you say his name? As long as you weren’t in an argument with him, or having some deep emotional revelation, you likely said his name very little. When we talk to people we don’t often say their name. It’s why we can hold entire conversations with a new person and then promptly walk away realizing we have no idea who they are. Unfortunately, some writers forget this tiny element of real life and force their characters to continually announce each other’s names as if they both have done something terribly wrong. This is but one of the many offenses committed by The Man on Her Mind, a mess of film populated by inhuman characters. 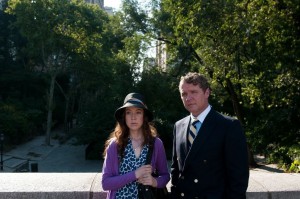 The very premise of The Man on Her Mind requires a bit of mental surrender. See, Nellie (Amy McAllister) has an imaginary boyfriend; well, in all honesty, she has a string of imaginary boyfriends. Her sister knows about Nellie’s penchant for the imaginary and desperately tries to fix her up on dates with actual men. One such guy, Leonard (Samuel James), is particularly revolting to Nellie. But here’s the catch, Leonard looks identical to Nellie’s latest boyfriend. Oh, and Leonard talks to an imaginary version of Nellie pretty frequently. That is the entirety of the film’s major plot, and while it is admittedly silly and childish, it isn’t all that complicated. I was just able to sum it up in no more than five sentences. Despite this, the film spends a seemingly endless amount of time just trying to explain itself.

The biggest hurdle that the film is never able to launch itself over is that of its mediocre to mind-numbingly terrible writing. The characters speak to one another as if trading pedantic, contrived, and self-involved letters. They use language that even the most conceited and highfalutin individuals would feel was a bit over-the-type. General pronouns are discarded favoring the much more literary “one” or dreaded proper name. The writing is so dismally out of touch that I often hoped it was merely a poor translation. No one with a firm grasp on the English language or any kind of practice at the conversational arts would posit these ridiculous turns of phrase as something authentic. This can only be the result of a cultural divide or, God forbid, an overly self-confident high school freshman with dreams of emulating the Bard. But no, this comes from lawyer turned hopeful filmmaker Alan Hruska.

I imagine Hruska is the type of person who walks around, nose firmly in air unwilling to sully his vision with the sight of lesser peons. In my mind he of course speaks in an affected Mid-Atlantic English accent. The actualities of his characters do not matter, for they could only be so lucky to be like him. Rather than crafting individuals with unique traits that agree with their complex eccentricities, he molds them all to be Cary Grant and Katharine Hepburn imitations. They live in a modern world, but act as if having been removed from a time of more refinement. These affectations and idiosyncrasies speak to the film’s disconnection from everything, be it story, character, or life. Not one individual can be shown to be a fully developed person, merely sketches that Hruska slides around as he sees fit.

Adding to the utterly insufferable script is a legion of mediocrity that continues to fail the film on nearly every count. The camerawork is pedestrian, ineffective, and occasionally lacking any semblance of real composition. One-shots utilize angles that make two actors talking to one another appear as if in completely different locations. The actors deliver dialogue with all the grace of those in a talentless community theater, lacking a modicum of subtlety or grace. The direction, which is provided in part by Hruska, is simplistic to the point of boredom, adding nothing of any substance to the film whatsoever. This is all despite a budget hefty enough to allow for multiple grandiose sets and professional equipment. It is the type of film that carries the shine of something much more accomplished, tricking you into thinking it is worth your time, when you would have been much better off indulging in a bit of fluff that at least has the good grace to know itself.

Within the film’s first ten minutes I was transported to my high school theater class. A room full of hormonal teenage amateurs, few of which were taking the class out of an actual appreciation for theater. Most put in the amount of effort necessary to sneak by largely unnoticed. However, there was always at least a couple of people that saw themselves as the next stars. Largely lacking in practice or discernible talent, they would read from scripts as if they had no idea how humans actually interacted, all the while believing themselves to be superior to the rest. The Man on Her Mind is that annoying wannabe thespian, wrongly seeing his aspirations as success. You will want to be rid of him soon after you two meet, but you are trapped, unable to escape his delusional image of cinematic prowess. As he collapses under his own ham-fisted theatrics you will worriedly look to your classmates and say the only thing that you can, “this guy can’t be serious.” We yearn for this to be a joke, but deep down you know that you cannot fake that kind of desperation.

Find more from Derek by following him on Twitter @DerekDeskins.