I remember in high school, being instructed by one of my teachers that a strong thesis statement should close out my introduction. The teacher expounded on the need for this succinct and clear thesis statement that is introduced to the reader before a discussion of any of the salient points begins to take place. In order to communicate effectively you have to know what it is you intend to say before you can even begin speaking, and this is the root of the lesson that my high school teacher was delivering to me. Human Capital bucks this notion, diving head first into the story and hoping to figure out its purpose along the way.

Human Capital sets itself up as a film that thrives on carefully parsing out its story elements. It begins in media res, floating the audience in, leaving them grasping at every single context clue in an attempt to gain footing. In many ways, the film is exceedingly nonchalant about its many characters. We latch onto this waiter who is just trying to get home after working a long event. In his journey he is knocked off of the road by a passing car, and this folks, is our major igniting factor for the rest of the film. Having offered up this bit of seemingly trivial bodily harm, the film then begins to tell you the rest of the story. It’s just that rest of the story only has a tangential relation to that poor waiter. 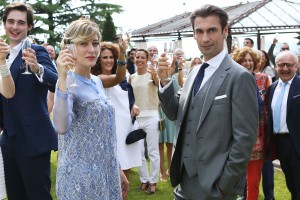 waiter. That is largely not the case. This is a story of two families that in no way belong together and the struggles of class and just general rude behavior that comes with it. This isn’t a Crash, or Go, or 21 Grams, where all of the pieces will magically fuse together, folding upon itself as it gradually reveals its deeper message. This is a soap opera pretending to be something more.

In the very construction of his story, director Paolo Virzi holds his cards far too closely. I understand the desire to only tell the audience as much as you believe they need to know, but in the execution of Human Capital, Virzi seems to be doing so not out of a greater sense of knowing but the complete opposite. Much of the film has us dragged along the mundanity of forced interactions and bad decisions. Fabrizio Bentivoglio’s Dino is shown as a relentlessly annoying every dad, who yearns for more while not really having the faculties necessary for going higher. Unfortunately, we come to understand little of Dino’s intentions, instead having them illustrated as some cliché of the middle class craving to rise above their station. It is an oversimplification that immediately cripples the character, with Virzi feeling no need to develop any other type of character motivation or complexity. 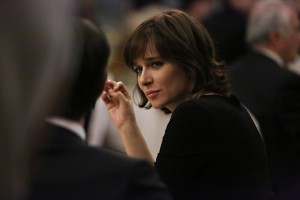 As Virzi takes us through the steps, stopping upon certain characters along the way, he struggles to illustrate the greater meaning of this all. In fact, the film doesn’t even begin to establish its sense of purpose until the final chapter. At this point, the film’s overriding theme, as it would certainly like to be considered, is forced upon the audience in all of its underdeveloped glory. It is as if Virzi had been simply following the banality of life for 90 minutes, only to then be struck by an idea for something deeper. It perhaps makes the film better to only consider the Serena and final chapters, for Carla and Dino are little more than odd ventures into misperceived talent and adult onset depression. Serena’s story begins to dig deeper into the idea of class structure and societal strictures that accompany it. Nevertheless, at this point it is certainly too little too late, only serving to make the sections that preceded it feel unnecessary and trivial.

The film’s struggle with story and thematic understanding are disappointing, as the images dancing across the screen are something to behold. The cinematography is gentle and unimposing, with shots that are exquisitely structured to convey more than the mediocre dialogue is capable of. Likewise, the art direction and alternatively lavish and decrepit sets build on these themes of class struggle. But it is largely for naught, as the film’s own limitations leave it crippled. This should be a film that builds its story on its multiple point-of-views, however Virzi chooses to only follow the characters around rather than allowing them to inform the greater whole. The audience is never allowed to grow closer to any of the characters, with emotional arcs largely going unexplored and 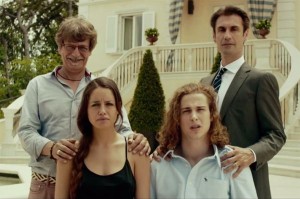 barely any trouble taken in defining who they are as people, rather than simple descriptors.

As Human Capital comes to its conclusion, it feels the need to tell you more. The text creeps across the screen, informing the viewer of what is to come of these individuals. In near anticipation of the audience’s question, it then goes on to clearly define just what is human capital. It has taken the film this long to figure out just what it is it has to say and like a comedian that gets no laughs, it wavers and thinks we just aren’t getting it. We got it. It just wasn’t very good.