It’s something we’ve heard before, artists unappreciated while alive, and only finding success posthumously. What would happen if people thought an artist was dead, but, they actually were very much alive? That’s the premise of Lulu Wang’s “Posthumous.”

Liam Price (Jack Huston), an artist living in Berlin is in a bit of a down swing. His work isn’t selling, and in the opening scene he breaks into art dealer Daniel’s gallery (played by Lambert Wilson) and proceeds to tear apart the work that is held in storage. Liam runs off into the night, and falls asleep, drunk. In the middle of the night his sketchbook is stolen by a homeless person that bears a slight resemblance. Guess what happens next? 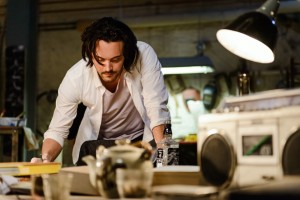 In a case of mistaken identiy, Liam is reported dead – however, another member of the art community pitches that Daniel hold an exhibition of Liam’s best work, and he offers to buy a great portion of it. Which will in turn, sky rocket the value of the rest. Daniel, torn at profiteering off an untimely death, agrees. He decides to head over to Liam’s workshop, to which is comes across a very much alive artist. They decide to keep the con going, it will allow Liam the finances to continue creating, while not worrying about the rest of the business.

McKenzie (Brit Marling), an out of work reporter in town with her fiancé, is fascinated by the story of Liam, and her interest grows when she meets a now clean-cut Liam who pruports to be the dead artists twin brother at Gallery opening of his posthumous work. A friendship begins, and McKenzie, being the clever reporter, starts to put the pieces together that Liam Price is very much alive.

The film attempts to be something of a Romantic Comedy, while it has its moments, I didn’t find it actually succeeded. There were some great intense moments of romantic connection, but it misses the mark on comedy.

Jack Huston is great, but, he brings a serious intensity to the role that I think ultimately took away from any attempts at comedy. I was surprised at Brit Marling’s performance here, she felt very wooden, and not completely into the role as the rest of the cast. Outside of a few scenes, I didn’t find she had great chemistry with anyone.

The art direction of “Posthumous,” was spectacular. The Art Department was able to create pieces that reflected Liam’s journey through out. The final piece of the puzzle was the photography of its location. The film succeeds in capturing the beautiful city of Berlin in the middle of Fall, and it is the cherry on top of its great art direction.

“Posthumous,” is cute, it’s great to see this type of film take place outside of the typical New York City setting. I think Huston did turn in a great performance, and we’ll definitely be seeing more of him as his star shines brighter. “Posthumous,” may not succeed in everything it set out to do, but it definitely sets a great direction for Director Lulu Wang, and I’m looking forward to what she does next.