A lot is often made of the propensity for films to surprise us. The idea of the reveal is something inherent to the lifeblood of cinema, for what greater unveiling is there than the slow pulling back of curtains from over a screen. But in this age of the spoiler-laden internet, the reveal is often minimized to the easy and lazy plot twist. In the same way that many horrors have been simplified to a series of jump scares, a surprise, to many viewers, equates to a twist of plot that no watchful eye could have possibly decipher. However, film is an expansive medium that need not rely on simple gimmicks. It can surprise us in new and exciting ways with a story that plays out devoid of ridiculous labyrinthine explanations.

The Tribe begins by being completely up front with its audience. No, your projectionist isn’t screwing up, there isn’t anything missing. This entire film is in Ukrainian sign language and there will not be a single subtitle. “But Derek, you were just bagging on gimmicks. What is this but just a different type of gimmick?” Ok, yes. This decision by first time writer-director Miroslav Slaboshpitsky could be belittled to the point of being described as a gimmick. And trust me, this was my initial impression. I knew nothing about The Tribe before seeing it besides this “gimmick.” I expected to sit there searching for understanding, to be frustrated and confused throughout the entire runtime, annoyed by this decision to put the audience on the outside. But, The Tribe is as much about Ukrainian sign language as Toy Story is about actual toys. If you think that’s all it is, then you’re kind of missing the point.

The truth of the matter is that by removing our understanding of conventional language, Slaboshpitsky has established the viewer squarely as an outsider. Rather than focusing on developing an environment of empathy and proximity, he seems to revel in the concept of separation. We are not meant to be close to the goings-on or to establish some deep emotional ties to these nameless adolescents. Instead we sit on the fringe, privy to a world that we should not be seeing. Our struggle for understanding is endlessly organic. We are voyeurs to a world we do not belong in, to a place to which we wouldn’t want to be a part. In establishing this viewpoint, we absolutely should stay disconnected. But just as Rear Window’s Jeff became consumed by the world he watched through binoculars, the longer we stay, the deeper we delve. 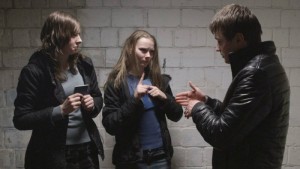 Despite its ability to draw you in, it has trouble constructing its actual story. Without exposition or explanation the viewer is largely left treading water in an ocean of obscurity. The general theme of criminal activities and villainy is palpable, however the actual events are puzzles that are often too difficult to solve. Its voyeuristic tendencies, and somewhat large populace, don’t allow for thorough character development. Often scenes have the feeling of asides or off-shoots to the greater story. In fact, Slaboshpitsky’s proclivity to indulge in the more violent or sexualized elements act as distractions from the stronger search for place, especially in regards to his female characters, that powers the majority of the film. There are whole plot developments that don’t seem to add to anything greater, meandering and unengaging, living to bewilder more than enhance.

However, even these less involving sections maintain a high caliber of filmmaking that continues to set the film apart. The camera work is often simplistic and minimal, moving only as much as it absolutely has to. Long shots further place us as outsiders looking in. It is the unflinching glare of the camera’s steady gaze that lends many of the film’s most memorable and emotionally tortured scenes their unquestionable punch. Every moment is so carefully and artfully composed. The sheer confidence with which Slaboshpitsky deliberately carries it all out is at the level of a filmmaker of far more experience. The Tribe never feels like a first outing, but the result of tireless devotion and years of practice. 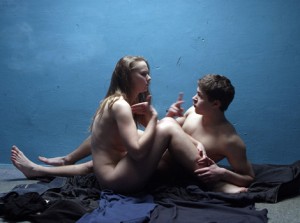 The Tribe is of an ilk that laughs at more disposable fare. It isn’t a film that you consume and easily walk away from. Even as the credits roll, it continues to leech into your brain, urging you to pry deeper, to think more, to revisit its dark and troubling passages. The problem is that The Tribe is such a tough watch, one that you survive and endure rather than revel in, to the point where the thought of reliving its moments is positively dreadful. The Tribe is feat of filmmaking, a film that utilizes the medium to its greatest extent. It has its pitfalls of meandering story and persistent misogyny, however the skill of its director Miroslav Slaboshpitsky is without question. Just please, don’t make me watch it again.