The Look of Silence is playing now at the Landmark Kendall Square.

I wasn’t shy about my love for Joshua Oppenheimer’s The Act of Killing. When I first saw it, it devastated me, and to this day I believe it is one of the best documentary films of the last decade. Its loss at the Oscars was the first time I began to take a hard look at the Academy’s treatment of documentary film, quickly realizing that this voting body has no idea what it was doing. Now with the release of Oppenheimer’s companion piece The Look of Silence, he has not only added texture to his original film, but produced a documentary of at least equal quality that manages to feel connected and all its own.

There was something of a vastness to The Act of Killing. Oppenheimer’s approaching of the leaders of the Indonesian government and the men behind the death squads carried with it an air of the more grandiose. It’s not that the film is impersonal or disconnected, just at a higher level. The subjects aren’t men you want to commiserate with or have humanized to any extent. Their villainy keeps us at a distance, at least for our own emotional and mental well-being. But with The Look of Silence, that distance is demolished. Adi Rukun, the film’s center, is approachable, likable, and smart. Where in The Act of Killing, it felt as if we were always lingering over Oppenheimer’s shoulder, now it is as if we are sitting right next to Adi. 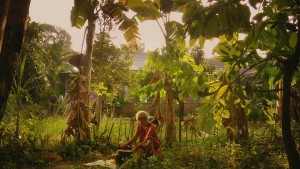 That is what ultimately makes The Look of Silence so successful. It isn’t merely a continuation of The Act of Killing or just another viewpoint. It is an entirely different film in its construction. Oddly, upon seeing The Look of Silence, I was reminded of bigger blockbuster fare. When Joss Whedon had just wrapped The Avengers he was obviously pummeled with questions of how he would do a sequel. SFX magazine asked Whedon how he would top The Avengers, to which he said, “By not trying to. By being smaller. More personal, more painful.” While that may not have been how Avengers: Age of Ultron ended up working out, that is exactly what Oppenheimer does here. He strips the story down to a single family. With this narrower gaze there are new truths that are dredged up and a story that was already horrific is lent a personalization that makes it all the more palpable. In fact, it is this new point of view that allows us to see the rippling devastation that continues in Indonesia to this day.

And that seems to be Oppenheimer’s point. Yes, the Indonesian killings were a terrible and inhuman thing, but it wasn’t just the one isolated event. By having the bad guys take power, there is an undercurrent of fear that permeates society. These are not only memories, but current consequences. The idea of free thought is sacrificed. History is written by the victors, and these victors are determined to ensure that they remain firmly in place. It is something out of an Orwellian dystopic future, with a culture of misinformation and silence that perpetuates the misgivings and mistakes of the past. In denying the truth, by remaining silent, society remains stagnant. You cannot move forward and learn until you can adequately address the truths of the past.

The Look of Silence always feels so close and it is that proximity that lends it its real power. Fear, while being a strong thematic through line, also carries over into the audience. For The Act of Killing, the danger of making the film didn’t truly reveal itself until the many “Anonymous” credits began to roll across the screen. In The Look of Silence, it is much more apparent. The idea that Adi is putting his life, and potentially his family’s, in jeopardy is very real. The calculated way in which his interviewees attempt to cajole out incriminating information is deeply unsettling. In probing deeper, the danger is brought to the forefront, and the film is made all the more revelatory. Adi pushes farther than most would dare and in so doing reveals a raw nerve on both sides of the debate, something that could not be accomplished the last time out by virtue of the subjects’ own inherent pride and bombast.

The Look of Silence never feels like the simplified idea of a documentary. There is something narrative to the way Oppenheimer builds his films. Ultimately, that is his real skill: genius storytelling. There is a balance of the journalistic and entertaining that elevates the film to a higher plain of the cinematic. On this subject alone, he has crafted two wildly different yet completely masterful films. On their own, and certainly they function beautifully on their own, they are insightful and captivating. However, when taken together, they represent the best of what cinema can, and should, do. The Look of Silence’s smaller scope and pointed gaze allow it to reveal a more personal and harrowing view of what evil can create. This is great filmmaking. This is brilliant storytelling.

See this movie. See it now.

Get more from Derek by following him on Twitter @DerekDeskins