It’s funny to think that only 50 years ago the Hollywood studio system nearly collapsed under its own weight, mired in the wake of several expensive box office flops. It seemed at the time that pouring exorbitant resources into the production of blockbusters was an unreliable financial gamble, and what followed was a decade-long rise of the independent film that brought with it some of cinema’s greatest achievements (Mike Nichole’s masterpiece The Graduate in 1967 being perhaps the most notable example). It took a sci-fi masterpiece, the original Star Wars trilogy, to return the studio system to prominence again, and things have remained more or less as they are ever since. Fast forward to present day, and history began to repeat itself. “Hollywood” blockbusters (in quotation marks as many big box office films are now produced in either Canada, the American South, or the East Coast) began to crumble after a series of busts, and it seemed the longevity of the studio system itself was once again cast into the shadow of doubt.

Enter the Marvel series, all drawn (pun intended) from comic book source material, the real life superhero of the major studios. Marvel blockbusters have produced a windfall of success with twelve movies and counting since 2007, and ten more in the immediate pipeline. Grossing $8.7 billion worldwide so far, it has fast become, far and away, the highest grossing film franchise of all time. The genre hangs its hat on special effects and extraordinary action sequences, but in some rare instances it has even produced a few gems that add real credibility to these derivative works. Frank Miller’s Sin City (2005), as well as Marvel’s first Iron Man (2008), The Avengers (2012), Captain America: Winter Soldier (2014), and above all the astoundingly good Guardians of the Galaxy in 2014, have set the standard for what is possible within the genre. Enter the newest addition to the canon, Antman, which took home an eye-popping $234 million worldwide in its opening weekend alone, proving there is nothing insect sized about the revenue of all things Marvel inspired. To compare Antman to the aforementioned greats of the genre would be holding a candle up to the sun, as this movie seems to have been aiming for a lower bar at the outset. Antman captures the comedic nature of its source material well enough, but comes off as cartoonish in its execution, without the cinematic chops, brilliant performances and inspired writing that held up its more finely realized siblings. It is the inevitable result of any endeavor in which “good enough” is the conceptual bulls eye. 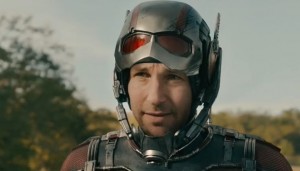 Chief among my issues with Antman is its casting, representing a collection of bargain bin talent so limited in what they could ever accomplish that it immediately establishes the whole affair as nothing more than a silly romp. Paul Rudd plays our hero Scott Lang, a lovable burnout roped into the superhero biz with his accidental theft of a super suit that can shrink him to the size of an ant. Rudd has carved out a successful niche for himself in honest, witty comedic roles such as 40 Year Old Virgin (2005), Anchorman (2004) and Knocked Up (2007). But asking him to dive into drama with any depth is asking a fish to ride a bicycle. Michael Douglas does what he can, but regresses into a caricature of himself as Hank Pym, the suit’s inventor and retired superhero turned mad scientist. The rest? Well, when rapper-turned-actor TI is the standout performance in a group of Shakespearean jester characters placed solely for ba-dum-ching comic relief, you know you’re in for a long two hours. Antman’s nemesis Yellowjacket (played by House of Cards actor Corey Stroll) seems toothless as Pym’s troubled former protégé, his character too insecure and distracted by his own legacy to ever feel like a formidable foe. Pym’s whiney, cynical daughter (Evangeline Lilly, best known for her roles in The Hobbit trilogy and the TV series Lost) serves only as an incidental love interest and bit player in the scope of things. Each underwhelming performances muddies the next, blending into a singular, bland and unspectacular soup.

Add to that, the tone reads as plain silly rather than light hearted or tongue in cheek, as though the creators themselves made the film half in jest. The original Antman comic books always read to me like a clever parody of the superhero genre, and so requires an absurdist setting to forgive the impossible physics and absences of suspense that other more successful comic book inspired movies rely on for their heft. But by placing it in a literal world, scenes of action and drama left me laughing at Antman, rather than with it.

The plan ultimately is to bring Antman into the fold of the Avengers series, joining this character with the crowd of superheroes established in other movies, in what will inevitably be more profitable films to come. The ensemble approach might prove kinder 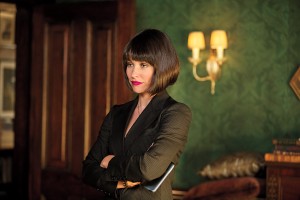 to this character, but I am dubious at best. Technically these movies all share the same universe, but to me the gravity of the world presented in Antman is meant to be taken with a grain of salt, unlike its much more sincere counterparts. That said, there is precedent here for us to believe in a brighter future for this superhero.  Some of the Marvel franchise’s worst films, such as the truly wretched Thor series (far worse at its best than Antman is at its worst) enjoyed a very successful reclamation project when its character was joined with the Avengers series’ clever cast of misfit superheroes. Can such a silly, juvenile tone survive the translation to the gritty and dark landscape of its counterparts? Can we ever really buy that the future of humanity relies in part on Antman’s goofball tomfoolery? Considering the groundswell this film has produced, it seems assured that the forces of darkness will be descending on the Marvel universe in short order, and for better or worse we will all bear witness.