The Second Mother opens at Kendall Square on September 18.

We are approaching that time of year when all of the studios start to dole out their “best” films of the year. Yes, that strange time when film critics are afforded the tiniest amount of power (in all honesty that is mostly in our own heads) and people apparently start to actually listen. This is a time of the most Oscar bait-iest of films. A time of biopics, accents, and a long list of films that most audiences won’t even bother seeing before forming an opinion on. Buried within the press kits and campaigning are the smaller films like The Second Mother, a film so draped in the unimposing as to likely go forgotten.

The Second Mother is certainly a slow burner. It’s the type of film that appears to be so normal and uncaring of your opinion as to be quickly discarded. Admittedly as it began, its plodding pacing left me cold. The goings on of the maid to the wealthy is just about as exciting as most of our jobs. You clock in, you do your assignments, and you clock out. Only for Val, there really is no clock. Her job is very much her life. She lives, breathes, eats, and sleeps where she works. But yes, it’s slow, it’s boring, it’s normal, and that’s kind of the point. 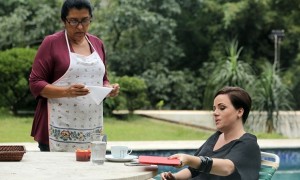 To us, Val’s life is nothing special. We wouldn’t look at Val and shout her successes with bravado. She thrives in the shadows, in the corners that go ignored. She is at her best when you don’t even know that she is there. That is how The Second Mother begins, with us sitting quietly unimpressed. But thanks to a remarkable performance from Regina Casé that is in no way how it ends.

Casé disappears into Val. While the other actors do a perfectly fine job, their labels do not fade away the way Casé’s does. Often it seems not that you are watching a film but simply catching a glimpse at Val’s life. There is an aching honesty in the very words that she speaks. You don’t get frustrated at the film for the way in which Val chooses to act, you get frustrated at Val herself. The sheen of the screen fades away as you lean in closer just for the chance to know Val more. Anna Muylaert is careful not to make this some deep character piece on the life of Val. This is a slice of her, just a piece with us very much lingering outside, voyeurs on a life we yearn to know more. The revelations are few and far between. This isn’t some grandiose tale of triumph. It is far too authentic for that simplification.

Unfortunately, the rest of the film is not as subtle as Val is written or as Casé performs. The supporting characters are broadly drawn and scoff at your vision of subtlety. That isn’t to say that the actors do the work a disservice, rather that the film itself is underdeveloped. While Camila Márdila does what she can as Val’s daughter Jéssica, she isn’t offered much to work with. As written, Jéssica is the embodiment of teenage angst, annoyed at the world, proud, and ungrateful. The domineering housemother Bárbara is a villain cut from the Disney stepmother line of cloths. Fabinho is simplistically golden and Dr. Carlos strangely pedophilic. When compared to Val, they don’t make sense in the same world, let alone the same film.

Perhaps the simple nature of the other characters is nothing more than a tool to bring us closer to Val. If this is the case, Muylaert has certainly made a strange choice, if admittedly a successful one. Val is whom you come to care about, the other stories fade into the background, and with Regina Casé imbuing her with an ease and charm, it makes it all worthwhile. Being a parent is hard and complicated, and writer-director Anna Muylaert finds a way to roll all of that complexity into one intriguing morsel. The Second Mother isn’t a film about massive changes or exceptional growths, it is one about the small moments, about what goes forgotten, and finding the time to recognize just what those little things can add up to.

Now go be a good kid and call your damn mother.

Get more film musing by following Derek on Twitter @DerekDeskins.