I don’t hide how much I love Matt Damon; I think he’s a great actor with excellent screen presence. When I heard the premise of “The Martian,” I knew what I was in for: two hours of Matt Damon stranded on Mars, directed by Ridley Scott? Sign me up.

Adapted from the novel by Andy Weir, “The Martian,” is about astronaut Mark Watney (Damon) being stranded on Mars after a sudden Martian storm causes his crew to abandon their mission. Left for dead, Watney wakes up, and now in a Martian version of “Cast Away,” has to overcome the challenges of the uninhabitable planet, and find a way to last long enough for the next Mars mission to arrive.

While the opportunity was there, this wasn’t dark Ridley Scott a la “Prometheus” or “Alien.” Despite the situation, there’s a certain light, believable humor present – no Wilson for Watney to talk to, but he narrates his observations and challenges through a sarcastic, self-aware filter onto the habitat’s video logs. 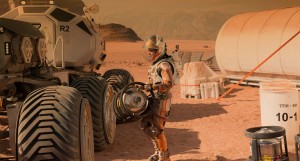 The film in some ways is as small as a director like Scott can make it – a simple story of survival only complicated by its setting. Watney finds clever ways to help his situation, and it all seems fairly plausible (though I’m not a NASA scientist).

The film looks great in 3D, though there’s nothing here we haven’t seen before. Much of the CG is used in the vast Martian landscape, as well as in its space sequences.

Compared to a film like “Gravity,” “The Martian” is nowhere near as stressful – it’s a fun, entertaining take on the survival story, and I thoroughly enjoyed it.