Beth (Caitlin FitzGerald) is a young actress who seemingly has got everything going for her – she’s continually working, and making residuals off her commercial work. Her professional life is good, but her friendship with her friend Anna (Mackenzie Davis), not so much. “Always Shine” is a psychological thriller that captures how the culture of Hollywood pits young actresses against each other – whose the prettiest, whose the most talented, and whose got the most promise.

The film opens with an uncomfortable close-up on Beth during an audition. Beth is reading her lines to the camera, and off-camera, a casting director is asking awkward questions regarding the significant amount of nude scenes in the film. “Don’t worry sweetie, we’ll make you look pretty.” It’s a stand-out scene that truly highlights the exploitative aspects of the industry.

Anna and Beth head out to Big Sur for a weekend getaway, a chance for the friends to reconnect. The pairs relationship is uncomfortable and anxious. While its clear these two are friends, Beth is walking on eggshells around Anna. She’s insecure about her own success and the lack of Anna’s, but she still wants to save their friendship. Beth plays down her success, they “aren’t good movies.” Anna focuses in on Beth’s typecasting, and asks if she ever “feels like a whore” for taking her clothes off so much on screen.

Davis & FitzGerald have an amazing dynamic in the film – Fitzgerald plays Beth as reserved, quiet, thoughtful, with Anna being much more emotional, aggressive, and volatile. These performances become even more complex in the third act – but, we won’t spoil anything here. 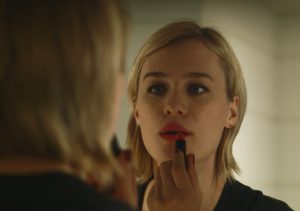 As more and more information about Beth is revealed to Anna, it drives her jealousy to the brink. “Always Shine,” kicks off with the tension during the credits sequence, visceral and horrifying glimpses at the direction the film takes, and never lets go. Much like Takal’s debut, the uncomfortable nature of jealousy pushes you to the edge of your seat as the character’s relationship starts to unwind.

“Always Shine,” is a stand out edgy thriller with some great Lynchian callbacks. Takal’s sophomore effort shows how far she’s come since her excellent debut, and I can’t wait to see more.