Like director Rupert Sanders’ SNOW WHITE AND THE HUNTSMAN, his new film, GHOST IN THE SHELL, lacks substance underneath its shiny exterior. Scarlett Johansson acts circles around SNOW WHITE’S Kristen Stewart, but the biggest flaw in the drawn-out narrative of this adaptation of GHOST IN THE SHELL is not just in its pacing; throughout the movie, GHOST feels like it’s drawing heavily from other works rather than from the original manga. 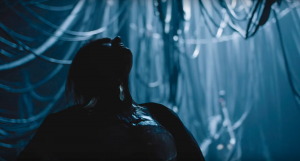 Hanka Robotics leads this fictional world as the preeminent developer of biological enhancements, from eyes to motor movements. Mira Killian (Scarlett Johansson), a victim of a terrorist attack, is brought to Hanka for a special project ahead of its time. Her human brain is integrated into a fully mechanical body, and a year later, Mira has become Major, a cyber soldier in Section 9, an anti-terrorism force. Major stumbles across a plot looking to murder Hanka scientists, and together with Batou (Pilou Asbæk), investigates; as the story progresses, Major starts to learn the secrets behind her identity.

While the plot sounds intriguing, the pacing and execution are the biggest faults of the film. It features some amazing and beautifully executed action sequences. In her previous work, Johansson has well established her ability to kick serious ass, and look bad ass doing it – the problem here is the plot is so basic and predictable, that even as the titular character, her talent doesn’t feel fully utilized. There are times where the film grinds to a screeching halt and we are spoon fed tired and predictable plot points, then we’re expected to jump right back into the action.

Somewhere in an early draft there’s a deeper exploration into the ethos of this world, but only hints of it remain. Characters talk about the modifications/enhancements they’ve undergone, and Major struggles with the idea of being human in an artificial shell, but it never goes deep enough. Cutting back on the Sci-Fi elements and the social commentary on enhancements
was a mistake.

The film at times looks stellar – the flashy BLADE RUNNER-esque future production design definitely stands out, but something about the world doesn’t mesh. With the beloved source material, GHOST IN THE SHELL needed to appeal to its very loyal base, and it’s clear there wasn’t enough to bring the base on board. There’s potential throughout that could have made the film into an entirely new cinematic franchise, but I’m afraid the studio may never get a second chance.