Bo Burnham wasn’t looking to tell a typical coming-of-age story with his feature film debut, EIGHTH GRADE. The film’s goal is to portray the timeless challenges of the transition into high school in today’s digital age. Elsie Fisher stars as Kayla, a charming young woman who creates inspirational “advice” videos on YouTube and is in the last days before the end of middle school.

Voted “most quiet” by her classmates, Kayla struggles with making solid connections with the people around her. We understand more about Kayla’s social status when she’s invited to a popular girls pool party by her classmates mom. Filled with anxiety, Kayla makes the decision that this is an opportunity for these kids to get to know her. Burnham’s use of pulsing electronic music really comes to a head in this sequence, bringing up the audiences stress level to Kayla’s. 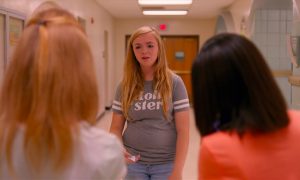 Some of the best scenes in the film were Kayla’s interactions with her Dad, Mark (Josh Hamilton). Mark, a classic awkward Dad, is challenged with navigating his angsty teenage daughter, where sometimes just trying to be there can be rewarded with conflict.

Kayla’s YouTube channel serves as a device to let the audience into her internal dialogue. Though, like everyone on a social media, what she presents isn’t entirely representative to the truth, just a version of it.

The authentic awkwardness between characters, the um’s and uh’s between thoughts – invoke the feeling of documentary rather than a narrative film. Credit goes to Fisher, who mentioned at the IFFBoston Q&A that though there was some improvisation, most of the dialogue was true to Burnham’s script.

EIGHTH GRADE is a special film, it manages to capture the awkwardness and sheer terror of a period in everyones life that is universally relatable. Be sure to look for it as it makes its rounds later this year!