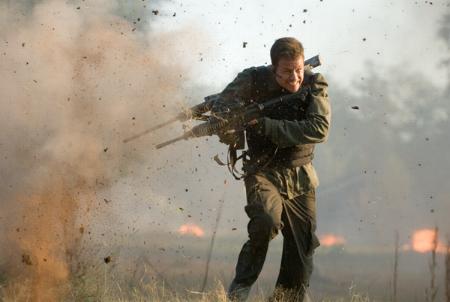 A retired, expert marksman is set-up and blamed for the assassination of a bishop and the attempted assassination of the President. Working with a recently fired and disgraced FBI agent, the marksman finds that his set-up goes high up into the halls of power.

That is the plot of Antoine Fuqua’s ‘Shooter.’ If it also sounds like any number of action movies, well, yeah, there’s that. And that’s what precisely is wrong with the movie.

Mark Wahlberg stars. If you’ve seen him in one of his better performances, ‘I Heart Huckabees’s,’ ‘The Departed’ or even ‘Invincible,’ you know he’s a likeable enough guy and that no one’s ever going to be really upset if Mark Wahlberg is in the movie. It also stars Danny Glover who, has apparently found that being an action star is one thing that he was getting too old for, and he now plays the evil ring-leader in the plot to take out the President. Ned Beatty stars as a corrupt Senator while Michael Pena plays the fallen-from-grace FBI agent. And all are good actors. And all look bored.

Jonathan Lemkin’s script is based on the Stephen Hunter book and even that is walking through the motions. The movie opens with something exploding. Then we have a quiet interlude. Then Mark Wahlberg finds that the task he came out of retirement for isn’t really what they were asking him to do. I’m going to stifle a yawn now.

This is a paint-by-numbers movie where everyone involved knew they would have a hit action movie if they didn’t rock the boat too much and didn’t stretch the boundaries of the genre. Director Antoine Fuqua tries to keep things interesting, but even the cutting style and shot choices aren’t too exciting or adventuresome. Something just blew up- let’s get a slow-motion shot of someone walking out of the smoke and dust.

The only real unique angle that the movie offers is that of the long-distance marksman. Whalberg is only brought in on jobs where they are unable to walk up to the person and shoot them in the head. It’s an interesting idea and certainly would make for an interesting action movie. However, the filmmakers completely misuse this fact, only utilizing in the last final shootout.

‘Shooter’ doesn’t earn it’s two-hour running time and I found myself shifting and getting itchy by the end of hour one. If one was looking for a positive about this movie, I could only say that it is in color and that the camera was focused most of the time they were shooting. For everything else, ‘Shooter,’ (I know it’s a terrible pun, but you must have seen it coming a mile away,) misses the mark. -Sam