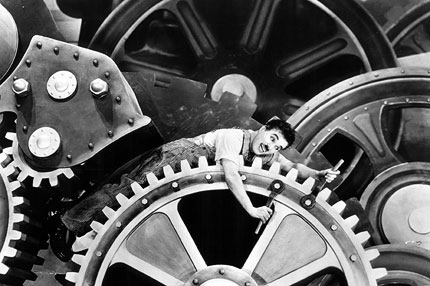 Usually when I use my time machine I travel back to the year 12 BC and hunt stegosaurus. After a long days hunt I like to head down to the local prehistoric bar and drink ale and hit on women dressed in leopard print togas with a bone through their hair. Then I club them and play with a Nintendo I brought from the future.

On this occasion, however, I traveled back and watched a Chaplin film, “Modern Times.” One of best movies I have had the pleasure of watching. In this movie you get a very gloomy prophecy of the effects technology has on the common worker, the increased separation between the blue and white color workers, increased policing, and the ill effects all of this has on society, but you laugh through it all.

This film features Chaplin’s first foray into the world of sound, but even with this he is quick to make a point: even with this fancy-shamcy (why isn’t this phrase used more? I bet it has something to do with the fact that it can make even the toughest man sound weak. [Just to be clear, the toughest man alive is me. I am the roughest and toughest because I eat kegs of beer and punch through 700 feet of concrete for breakfast. You don’t think punching through a wall is a good, well balanced breakfast? Well it has all the nutrients I need: concrete and ass kicking.]) technology, he doesn’t need it to tell a story. The initial sounds we hear are from mechanical instruments, a radio, TV, and factory sounds, a way to ease the audience into his use of the audible. Eventually we get to the climax of the movie where the Tramp (Chaplin) delivers his famous dance sequence in a dinning hall and we, for the first time ever on film, hear his voice. He sings a song and does a nifty little dance to tell a story, but if you listen closely the song he is singing is about as intelligible as Britney Spears (on or off drugs, they are pretty much the same thing). The song has become known as the gibberish song and it was Chaplin’s way of saying, “hey, I can talk, but I still don’t need to.” And you know what? He’s right. As right as rain. Rain bouncing off a windshield. Of a car. An old car. Driven by an old man. That eats homemade apple sauce. That his wife bottles. *

This movie is a classic and one of my favorites. I think everyone should watch it. If you don’t watch it then I hate you. If you watch it and don’t like it then I not only hate you, but will drive into your house with a tank, blasting Born In the USA because you are unAmerican. (As a sidenote I will also be wearing my homemade Uncle Sam outfit which I constructed from curtains, milk cartons and a goat, whilest I destroy your home.)

PPS – Out of wings of angels.

PPPS – Angels she catches with love wrapped in sticky paper.

PPPPS – Sticky paper that was given to them by their grandson.

PPPPPS – The grandson is the one stuck in the rain.