Skip to content
home Feature A Bunch of Bava: Four Times That Night

Created at the end of the swinging sixities, ‘Four Times That Night,’ is a comedic take on Akira Kurosawa’s ‘Rashomon,’ with the same story being told from multiple angels. Bava adds a new twist to the concept, turning the story into a sex comedy. 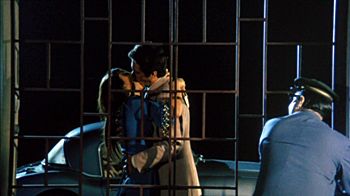 The movie opens with John driving in his sports car. While traveling through the park, he sees Lisa, an attractive young woman with her dog. While John is entranced, Lisa is less-so, but the barking of the dog gives away her hiding spot. John finds her and asks her out.

John picks Lisa up at her mother’s house (where she also lives,) and takes her out. Lisa returns home many hours later, with her dress torn and her mother frantic. When asked what happened, Lisa responds that John tried to rape her.

It is here where the ‘Rashomon’ aspect of the story begins. Lisa tells her version of the tale, with her playing the role of the virginal young-girl, and John playing the role of the sex-crazed swinger. She scratches his forehead badly in fighting off his advances, and ends up locking him in the bathroom as she makes her escape.

The next day at the bar, John recounts for his friends how he obtained the scar on his forehead. Lisa is practically a nymphomaniac, clawing at him, begging him to have sex with her again and again and again. John tries to explain that he’s tired and worn out, but, in this version, Lisa will have none of it.

Meanwhile, the sex-crazed doorman at John’s apartment is also looking in on them and recounts his take on the tale to the milkman. Even more outlandish than the previous two, his story involves the virginal young girl and three bi-sexual swingers. Esmerelda, one of John’s friends, comes on to Lisa and pleads with her to have sex with her. Meanwhile, John has hooked up with her flamboyantly gay friend and is busy having sex with him in the other room. Lisa ends up racing out of the room in horror.

At last we finally get the ‘real story,’ as John and Lisa go back to his place for a drink and, while trying to leave the apartment building, find the front gate lock stuck. They try to climb over the gate, thus the result of Tina’s torn dress and John’s scratched forehead. They end up sitting in the garden and talking, waiting for someone to come and open the gate. While they wait, they try to come up with a more elaborate reason as to why they’re stuck there.

‘Four Times That Night,’ is clearly a film of its era. It’s handling of homosexuality and drug use, to say nothing of its trivialization of rape, leaves a modern-day viewer a little surprised that such topics are handled so casually. That said, the film must be considered in the era is was created, with hindsight looking at the era it is viewed in.

Bava does an excellent job with color, making the most of the mod fashions and architecture. Again, one can see Bava’s ability in handling a low budget and mediocre sets to still tell a story that involves the audience.

The whole concept of the movie is based on truth. Film producer Robert Evans began his memoir, ‘The Kid Stays in the Picture,’ that there are ‘three sides to every story. Yours, mine and the truth. And no one is lying.’ Bava toys with this concept, drawing over-the-top, hyper-fantastic characters and showing the audience the world through their eyes.

As interesting as some of the topics raised by the film are, it is still a minor work in the Bava cannon. A somewhat rewarding viewing experience, but at the same time, not one that one will sorely miss either. –Sam