Skip to content
home Feature A Bunch of Bava: Knives of the Avenger 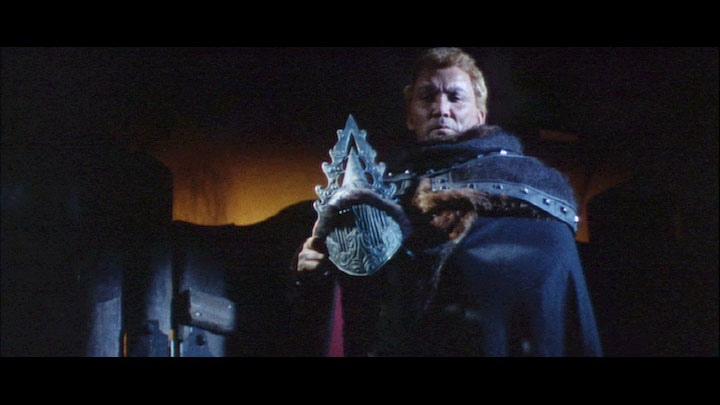 ‘Knives of the Avenger’ was the third of four movies Mario Bava made in 1966. As impressive as the output is, the style in direction of each of the four is equally solid and never lacking. However, sometimes the story lines of some of these films make it difficult for one to pay attention. ‘Knives,’ is essentially a Viking tale dressed up as a morality play.

The story is of Helmut, a journeyman of unknown origins, traveling in the land of King Arold. One day he comes upon a cabin occupied by Karin and her son, Moki. Karin is suspicious of the strange man, but Moki latches onto him, perhaps searching for a paternal figure in his life. Helmut shows Moki how to build traps to catch animals for food and even goes fishing, using just a knife.

Karin and Moki are living in fear of Argon, a ruthless and blood-thirsty tyrant. He rapes and pillages villages at will. Karin is concerned because she is a woman living alone with her son.

As the days pass, Karin begins to grow fond of Helmut as well, but worries what will happen when her husband returns. Helmut seems to recognize Karin, but can’t place where he saw her before. Then, it suddenly occurs to him; he used to be part of Argon’s army and took part in the destruction of Karin’s village. He gave up his title and role in Argon’s army because of his disillusionment with what they were doing. Karin does not recognize him because on that fateful night, Helmut was wearing a mask. Could Helmut be Moki’s father?

Argon returns and vows revenge on Helmut, trying to lure him in by kidnapping Moki. King Arold returns and agrees to help Hemlut rescue Moki. (It is also revealed that King Arold is Karin’s husband.)

The rescue attempt seems botched and beyond saving when Helmut throws a dagger into the heart of Argon, killing him instantly.

With Arold reunited with his family, Helmut rides off into the sunset.

The story of ‘Knives of the Avenger’ is basically a western in Viking clothing. While the story is an action film, Bava focuses on the human interaction and less on the violence. The shooting of the film, (Bava also acted as cinematographer, credited as ‘John Hold,’) is much more simplistic and basic than many of Bava’s more characteristic films.

While the turmoil within Helmut is interesting and definitely worthy of exploration, ‘Knives of the Avenger,’ moves too slowly for one to truly get caught up in the happenings. Much of the blame goes to the acting, which, in combination with the dubbing, too often allows your mind to wander from the story.

Some have suggested this is essential viewing for Bava fans because of the emotion and interplay between the characters that is not always present in his work. However, the slower pacing makes ‘Knives of the Avenger,’ hard to recommend to any but the truly dedicated. -Sam