I tend to ignore direct-to-video animated features. Right or wrong, I assume they’re usually poorly written and cheap products released to capitalize on an upcoming feature or our current goodwill towards a certain character. And with casts that usually read as a who’s who of television stars you’re not watching, the appeal was never there for me. However, every so often you stumble across that diamond in the rough, a film that makes you want to revisit something you’ve all but given up on. ‘Justice League – The New Frontier’ is that film for me. 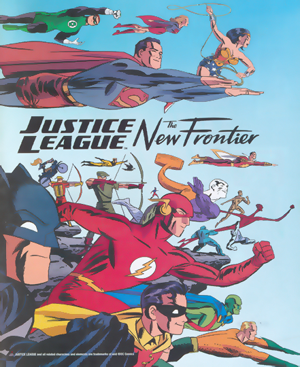 ‘Justice League – The New Frontier’ follows the future members as their paths eventually lead to the league’s beginnings; their coming together to fight an adversary they cannot take on alone. Sounds like a simple, straightforward story, right? It’s not. The story itself is really a metaphor for America as a nation coming together and taking control of its destiny. Set at the end of the McCarthy-era (there are various references to the McCarthy trials in the beginning of the film), there is a real sense of lost identity amongst the future members of the Justice League. Superman blindly follows the government’s bidding, the Flash is suffering from an inferiority complex as he watches other superheroes ward off world domination plans while he is catching petty thieves, Batman saves child from being sacrificed to The Center only to have the child scream in fear of his dark visage. The film sets a tone that everyone, superheroes, regular citizens and the government, are searching for something that they can’t quite reach on their own. And that “something” is ultimately manifested as The Center, a large amorphous “thing” that spews creatures (not unlike the way that the monster from ‘Cloverfield’ shed smaller monsters) whose goal is to wipe out humanity. As each superhero makes the choice to stand up and face this challenge, they ultimately find themselves together and form an alliance to take on the threat. Their success is told in pictures with a voice-over from John F. Kennedy’s speech about America heading towards a new frontier, emboldening a nation to unify and take control of its destiny.

The superheroes themselves are a sight to behold. They are all there, but may look unfamiliar to some. The depictions of the characters show their transition from the Golden Age to the Silver Age in terms of character design. This combined with the 1950s-style animation helps reinforce the time period and transition period of the characters and of the nation. The voice work for the characters is excellent. Batman, voiced by Jeremy Sisto, takes a bit getting used to, but ultimately works. The only voice I took slight issue with was the Flash, played by Neil Patrick Harris. It’s not that his voice didn’t fit the character, but it was more that it wasn’t different enough from his own voice that I would occasionally hear NPH instead of the Flash. But that’s a nitpick in this great voice work and voice direction.

While the ending of the film was incredibly effective with Kennedy’s speech and ultimately moved the needle from ‘good’ to ‘really good’ for me, ‘Justice League – The New Frontier’ is not without its flaws. With a runtime of 75 minutes, the story itself lingers in the beginning, setting the stage for each of these characters and at the 45 minute mark I found myself wondering how they were going to effectively bring this team together and get to the crux of the story with only 30 minutes to go. The story awkwardly jumps to the attack by The Center and feels rushed, giving the sense that 75 minutes wasn’t enough time to tell the story the filmmakers wanted to tell. Another issue was the general neglect of The Center. We’re never told what it is and while that could have been ok if it was developed more through the story, it seemed almost an after thought in this movie. For a thing that is the ultimate catalyst for a new frontier, to only get a mention at the beginning of the film and then only the occasional casual reference to it until it just shows up at the end made it feel under-worked and almost forced into the story.

But overall, these shortcomings didn’t detract from the film for me. ‘Justice League – The New Frontier’ is a bold step forward for direct-to-video features. In fact, it eschews the usual cash-in appeal that tends to go with these releases by stepping their action up to earn a PG-13 rating (a fact that they proudly tout on the cover of the DVD). When the film opened with a man shooting himself in the head, I knew this was striving to be something different. This was a step forward towards something new in direct-to-video animated features. As Kennedy called for a nation to unite and move itself forward, ‘Justice League – The New Frontier’ makes that call for direct-to-video animated features. This is a film definitely worth watching.