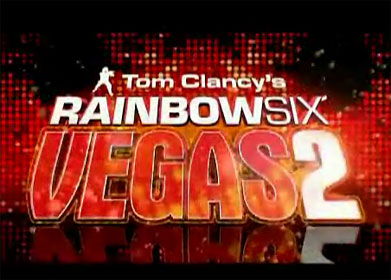 A little feature I’m going to start doing is to talk a bit about what game I’m most hyped up for, for the month of March that distinction goes to none other then Ubisoft’s upcoming sequel, Rainbow Six Vegas 2.

It’s predecessor should no doubt receive some achievement award for being one of the most underrated games of 2006. With its tactical, at times, white-knuckle multiplayer action, I found myself addicted for months. There’d be nights where I’d get home from work, power the 360 on, and play until 2am. My girlfriend at the time literally had to have an intervention…okay maybe it wasn’t that bad.

I’d never been a fan of the Rainbow Six Series, never one to run-in-guns-a-blazing, I found the planning involved in missions prior to their execution annoying, and the movement slow. Did R6 Vegas move slower then other similar games? Yes it did, but R6 isn’t like other shooters, the tactical choices you make effect you and your teammates.

So, what are they doing differently with Vegas 2? R6 Vegas wasn’t a game without flaws. As the game fell in popularity (and the little team we’d amassed fell apart with the release of other games), it became harder to find rooms on Xbox Live. You’d join a party, sit there, wait for their 20 minute match to end, to only find the lobby closed. This is fixed in the sequel. One of the best parts of the first game was its Persistent Elite Creation system, an even more advanced version is back. There is a stat-tracking system that observes your play choices, and unlocks weapons and equipment based on your playing style.

Do I hope I can find myself not doing anything with my life after its release date on March 14th, you betchya. But will it take me away from my predicted addiction to GTA IV? Only time will tell.