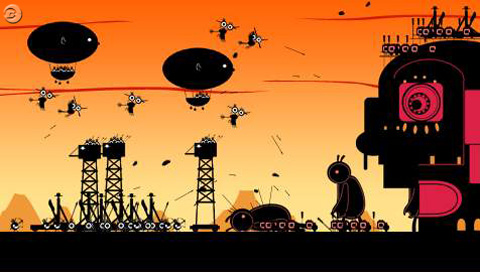 I like it, I can’t tell you why, but I like it. There’s something strangely addicting about hitting buttons to a beat, like a pringle, I just can’t have one. It’s music, its cartoonish 2D environment, it draws me to it pata pata pata pon, pon pon pata pon.

Oh right, I gotta write this review. There’s been some hype around this PSP release from the makers of LocoRoco. The game play is simple, and the story, interestingly deeper than you think. It’s about a tribe of people known as Patapon, a group that flourished until they were defeated by the evil Zigaton tribe. Their God, the Patapon, uses war drums to direct the tribe back to their home land.

Its gameplay is fun, and its art design is so unique. Using the four face buttons, you drum to guide the Patapon, you hunt for food, and you spawn more troops using their “ka-ching” currency. It’s hard to describe the strange draw this game has, its so simple, yet so fun, its easy to see why the entire internet is collectively saying, don’t read anymore, its 19.99, and the best game on PSP. Though, I wouldn’t agree with that statement, it is definitely a fun game, and seriously, crack that wallet open, whats 20 bucks?