De Niro used to be my favorite actor, about 15 years ago. Let’s face it, the man hasn’t made a great film since 1995’s Casino and Heat.And many will toss out “Well insert movie here was pretty good.” Well, there are plenty of things that are pretty good. Campbell’s Chicken and Stars soup is pretty good, but if I went out to a 5-Star restaurant, and that’s what they gave me, I’d be pissed.

This is Robert De Niro we are talking about. The man was once one of the most important actors of any generation. I’d say he took bigger acting challenges than even Marlon Brando. But now…he sucks.

10. The Score – This movie sucked because of the potential that it had. Yoda (Frank Oz) has never really been considered a great director, and he proves it here. This movie had 3 generations of amazing actors in Brando (his final movie), De Niro and Edward Norton. The reason this movie sucks, is because it sets up the robbery for over an hour, then has the robbery happen for about 20 minutes and then just when the double cross goes down and everything is getting nice and tense, the movie ends. WTF!? This movie could have used another hour, seriously. I recently watched this again and felt the same letdown as I did when I saw it in the theatre.

9. 15 Minutes – Another yawn in my Robert De Niro nap. Here he is a cop on the brink of solving a case with Edward Burns as his partner, but the media keeps getting in the way. 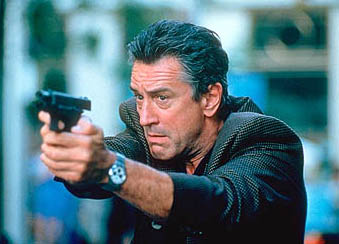 8. City By The Sea – De Niro is a cop who is trying to protect his scumbag druggie son. The only thing good about this movie is Francis McDormand, but mostly this just seems like something that would have
been played on USA’s Up All Night with Rhonda Shear in 1993. Minus any hot nudity.

7. Meet The Fockers – The best part of this movie is Dustin Hoffman, who is actually pretty funny. But man, please stop doing comedy Bobby. I understand an actor needs to stretch his legs a little, but Weeping Jesus…ENOUGH!

6. Analyze This – This movie had a few decent laughs, but wow, I never thought I would see Billy Crystal OUT ACT Robert De Niro. Harold “Eagon” Ramis must have had no clue how to motivate De Niro
because if the crying scene is any indication of how this movie would go down, I would have been better off whacking off for 90 minutes.

5. Analyze That – Holy crapola this movie blows. I didn’t think he could badly top his awful performance in “This”, but “That” really takes the cheese. I can’t wait to see “Analyze The Other Thing.” Actually, I can.

4. Godsend – The only thing scary at De Niro’s attempt at horror is how much the producers probably paid him to be in the turd. They should have kept the money and hired a better writer, or a scat fetishist to shit on the script.

3. Hide And Seek – De Niro wanders into horror territory for round 2. What a waste of time and hair dye for Dakota Fanning. Her teeth were actually pretty terrifying. Bobby…be a pal and go buy her some braces.

2. Rocky And Bullwinkle – The thing that pisses me off the most about this movie is that I saw an interview with De Niro long before this came out where he refused to say the “You talkin’ to me” line from Taxi Driver out of “respect for the filmmakers and the image of the film itself.” Well, I guess when they pay you 10 million, respect gets flushed because he sure didn’t hesitate to take a giant dump on
the role that made his career. Numbnuts.

1. Showtime – The only good thing about this movie is that I was in Hollywood at the time it premiered at Mann’s Chinese Theatre and I saw Keenan Ivory Wayans go into it with his wife and kid. That actually gave me more laughs.

So yeah…what happened to this great man?? This guy gave us Travis Bickle, Don Corelone, Jake La Motta, Jimmy Conway, Sam Rothstein and on and on and on. Every actor has his hits and misses but JEEEEZZZZ….its been WAY too long since we have seen a movie worthy of his filmography. Sad…really sad. He’s not getting any younger, but sometimes, when I look up to the sky…I pray to whatever is out
there that something will light a fire under that withered old ass and he will want to act again…not just sign a paycheck.