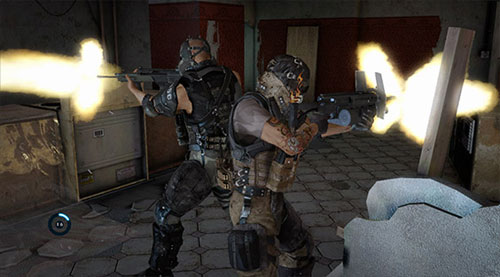 Today I’d like to take a look at the recently released shooter from EA Games, Army Of Two, for the Xbox360.

The touted draw to this game is that it’s really meant to be played in Co-Op mode, whether via Xbox live or split screen. This will allow the players to perform team related tasks, such as accessing higher areas by jumping off of your comrade, vehicle combat (one drives and one fires), simultaneous sniping,and resuscitation of a downed partner just to name a few. You can go about this in a single player fashion, but you’ll be partnered with an AI cohort—and the potentially dumb decisions it may make (for the purposes of this review I’ve only dealt with split screen Co-Op play, and a human partner).

The basic story behind the game begins with two soldiers, Rios and Salem, who start out as a part of the army rangers on their first mission to Somalia – which also serves as an in game tutorial – and as this mission ends, you are recruited by a private mercenary contractor. Cut to a bit later in the future as you and your partner take on various combat operations for large sums of cash as part of their organization. I’d like to take this moment to note that the cash you are working for allows you to purchase better weapons and upgrade them quite a bit to make them more accurate, do more damage, hold more ammo, an increase aggro meter. Aggro is another interesting gimmick to the genre that this game brings to the table—what it is is basically a meter that fills or drains as often as you fire on opponents. It’s basically a red flag that goes up over your head saying “Lookie here—kill me!” to all surrounding enemies, drawing their attention to you and leaving your partner more of an opportunity to flank them unnoticed.

Combat can get frenetic at times, since there will often be little to no warning before someone takes pot shots at you and you find yourself in the middle of a very ugly situation. Finding cover quickly is a key component here, and the third-person viewpoint allows for blind fire around said cover (at a reduced accuracy), or popping up out of the cover to take a more accurate, yet more exposed, first person shooting stance. Auditory clues are also important in this game at times, because you’ll run into landmines that you are guaranteed to set off, unless you here their distinct beeping as you approach.

-The way that a downed character, while waiting to be healed/bleed out for a game over, is able to continue to fire from a seated position. You can’t move at all, but you can provide cover fire for your buddy to heal you.

-The GPS system that basically provides you with a path to follow if you wander while on a mission. It will get you back on track if all you care about is the central task at hand and not the side objectives.

-Vehicle combat-I didn’t really like the hovercraft sequences, or the parachute combat very much at all. It just seemed a bit tacked on, out of place, and lacking in control.

-Lack of ammo-this problem seemed to arise at times when attempting to use weapons other than your primary one. Even the primary weapon was tight on ammo drops at times, but you could almost forget about it if you wanted to use special weapons like the sniper rifle for any more than the allotted ammo you got at the start of the level.

-Close quarters combat is frustrating, inaccurate, and with any luck, not necessary most of the time

A solid entry in the cover based, third person shooter arena. It certainly has some decent replay value to it and is a blast work through in Co-Op mode—like it was meant to be played.